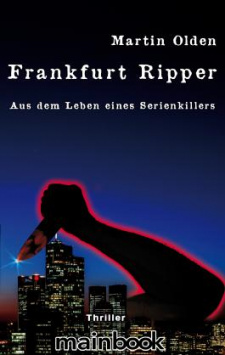 Frankfurt Ripper - From the life of a serial killer

For his young boss he is simply a relic of days gone by, which can be rationalized away without much resistance. For his neighbour he is the friendly man who always helps her. And for the kiosk owner around the corner, he is the loyal BILD buyer, with whom it is easy to talk about the current events of the day. But behind the inconspicuous facade of 60 year old Klaus Scholz lies a cruel monster. Because the older man from Frankfurt-Sindlingen is a serial killer who pursues only one goal: he wants to become a legend, a star on the Internet, whose Wikipedia entry makes Fritz Haarmann's story look like a good bedtime story. But so far his actions have not received real media attention. But that's about to change. Scholz meticulously plans his next murders, which he describes in detail in his frankfurtripper blog. And if that's not enough to finally become famous, then the murders must become even more fancy and brutal...

The journalist, presenter and author Martin Olden alias Marc Rybicki delivers with "Frankfurt Ripper - Aus dem Leben eines Serienkillers" a successful mixture of bloody serial killer novel and biting satire on the society and the media, which promise everyone his 15 minutes of fame. When the Frankfurt Ripper describes his murders to his community down to the last detail, the reader sometimes has to have a strong stomach. But the very matter-of-fact descriptions of the killing processes paired with the comments of the online users give the whole a satirical undertone, which at first seems to soften the horror a little. But when you realize how close the at first glance very exaggerated user comments are to reality, it runs cold down your back again.

Naturally the story is a bit exaggerated, which is always the case with satire itself. But unfortunately the Internet comments and the conversations that Scholz has with his fellow men prove to be less exaggerated than one would like. Here the author has looked his fellow men very closely in the truest sense of the word on the mouth. Only the fact that really everyone with whom Scholz talks - no matter whether taxi driver, geriatric nurse, kiosk owner or simple passer-by - immediately directs the conversation to current political or social topics and proves to be extremely well informed there - or at least believes to be so. These conversations all sound very similar, which could be explained by the fact that the story is told from Scholz's point of view and he retells the conversations in his own way. Even if the conversations are well written, a little less would have been more in this respect, since these dialogue scenes have a somewhat repetitive effect in the long run, while the reader has long since understood what the author is trying to get at.

The killer's sick train of thought, the blunted user feedback and the conversations characterized by disappointment, anger, prejudice and disillusionment create the image of a very cynical society in which fame - however superficial it may be - seems to be more important than humanity and ethics. Martin Olden has succeeded in creating a book that is entertaining and amusing at times, but also really painful, be it because of its brutality or because of the often depressing view of a world in which apathy, indifference and indifference are no longer a rarity. Embedded in well described Frankfurt flair, "Frankfurt Ripper - Aus dem Leben eines Serienkillers" is an exciting and bitterly evil book that can be recommended to all readers who like very bloody social satire with a lot of local color. Recommended]