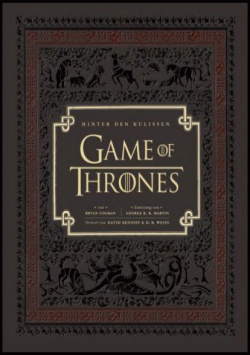 Whether as a book series or a TV series, "Game of Thrones" seems to be the measure of all things at the moment. The series in particular, with its mixture of opulent set, sex and violence in connection with the well elaborated screenplays that closely adhere to the original, loosely outshines many cinema productions. After the first two seasons had been extremely successful in the USA and the German Free TV premiere of the first season had also been a great success with many viewers enthusiastic about the fantasy history epic, a book is now on sale that offers the reader an exciting look behind the scenes.

After an introduction by author George R. R. Martin, who is very impressed with the adaptation of the first novel in his successful book series, and a statement by the two series creators David Benioff and D. B. Weiss, Bryan Cogman takes readers into the fascinating world of Game of Thrones, from the Wall to Winterfell to Königsbrücken, Westeros and Essos. All important persons of the individual countries, the different royal families and fighters, are introduced in short chronicles, before it goes to the view behind the scenes. The sets, the costumes, the effects or even the creation of the Dothraki language are presented in detail in numerous chapters. The whole thing is accompanied by numerous photos, whereby high-quality prom pictures of the series alternate with shots from the shooting, concept drawings and other illustrations.

This provides a very comprehensive insight into the development of the elaborate series. The book is not only a making of, but also a good companion work to keep track of the numerous characters and their relationships with each other. In addition, the design of the book has become very respectable. The effort put into the series is also reflected in this accompanying work, from the beautiful book cover to the design of the individual chapters. All in all a book that fans of the series and all those who want to become fans shouldn't miss. Recommended]