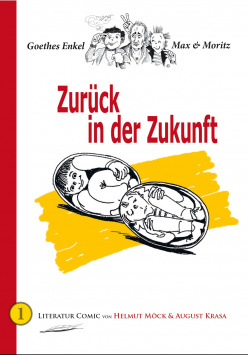 Goethe's grandson Max & Moritz - Back in the Future

This cannot be a coincidence: shortly after a certain Johann Wolfgang von Goethe blessed the temporal, Wilhelm Busch saw the light of day. What if Goethe, after his death from the "Great Goose", had been condemned to an accelerated rebirth for lack of humour and knowledge of the women's world and had had to prove himself as a specialist in these areas as Wilhelm Busch? In "Goethe's grandson Max & Moritz - Back in the Future", literary scholar Helmut Möck and illustrator August Krasa play with exactly this idea. But they do not only resurrect Goethe in the form of Wilhelm Busch. Even his most famous spiritual children Max and Moritz get a second chance. Although the two rascals ended up as goose feed, they are allowed to hatch fresh from the egg and have to deal with puberty, the ladies and old acquaintances in the present. And their role in mythology is also revealed here, as Max and Moritz are direct descendants of Zeus himself.

Möck and Krasa play wonderfully with references to literature, mythology and psychology, with quotations from Goethe's and Busch's works, bowing to these two literary masters in an extremely humorous way. Whether it is the rhymes or the illustrations, it always becomes clear with what respect for the material the makers of this literary comic have put their disrespectfulness on paper. Of course, it is an advantage if you know a bit about "Faust", Freud, antiquity and of course "Max & Moritz". Only those who know the source material will discover the cleverness of this first band.

But don't worry: you don't have to be a professor of literature, a trained psychologist or a historian to enjoy "Goethe's grandson Max & Moritz - Back in the Future". Because charm and humour are so extensive that the reading also works on the very simple entertainment level and is really fun. If you want to see for yourself how original, cheeky and clever you can be with classics of literature, you should definitely have a look at this literary comic!

You can find more information about the series here: Www.goethesenkel-maxundmoritz.de