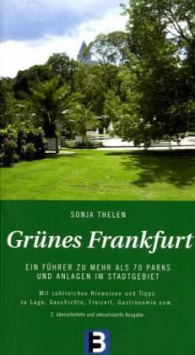 If you think of Frankfurt, the banking metropolis, Mainhattan, one word usually doesn't immediately come to mind: green! Statistically speaking, the city on the Main is one of the greenest cities in Europe. The city forest alone and the 70 km long green belt make an enormously important contribution to this. But there are still several parks, smaller forests and parks that make Frankfurt a green city in the truest sense of the word.

Just three years ago Sonja Thelen published her guide through the green Frankfurt in the B3 Verlag, in which she presented all parks, green areas, the city forest and the green belt. This book has now been published in a second revised and supplemented edition. Like many other books from the B3 publishing house, "Grünes Frankfurt" again shows many partly unknown facets of the city, which could even show old-established Frankfurters new sides of their homeland. In addition to the well-known excursion destinations in the countryside, such as the Palmengarten, the Grüneburgpark, the banks of the Main or the city forest, the handy book also presents smaller or hidden refuges in the urban jungle. The book does not only want to whet the appetite for discovering Frankfurt's green pages. The reader should also be informed about the individual goals. For example, possible opening hours and entrance fees are indicated, as well as the presence of children's playgrounds and gastronomy or the possibility to let your beloved four-legged friend run free or to prepare delicious barbecues with his friends.

In contrast to the first edition, the revised version does not only show the changes of recent years, such as the redevelopment of the Rothschildpark or all that has happened on the northern bank of the Main. It also takes a look into the future and presents parks that are currently in the making. The best example of this is the Kätcheslachpark in Riedberg, Frankfurt's newest district, or the Hafenpark in Ostend, in the design of which citizens could actively participate.

With many atmospheric, interesting texts by the Frankfurt native Sonja Thelen, compactly listed information and numerous illustrations, "Green Frankfurt" is the perfect companion for the summer. Whether by bicycle, car, public transport or on foot, the book shows many great ways to explore Frankfurt's green oases. Whether the beautiful Schwanheimer dunes, the Licht- und Luftbad Niederrad, the Bethmann-Park or the paradisiacal garden Nizza directly at the Main, here everyone will find the perfect destination. Absolutely recommended!