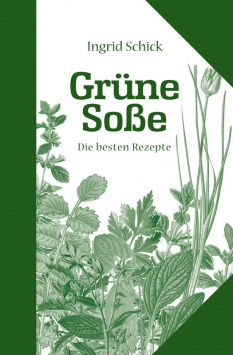 The green sauce not only delights the palates of connoisseurs, but also always causes heated discussions. Because the right preparation, starting with the ingredients and ending with their comminution or mixing, are all real philosophies that experts have been arguing about for decades. However, the focus is on enjoyment. No matter which variant of the green sauce you choose.

Not only since Johann Wolfgang von Goethe made his preference for the "Grie Soß" obvious, this very speciality enjoys great popularity. And yet there has never been an official book dedicated solely to this delicacy. Until now. Because now Ingrid Schick, with the help of 25 recipe godfathers, has set about finally setting the Green Sauce the monument it deserves.

There are in "Green Sauce - The Best Recipes" not only different variants of the "Grie Sauce" to discover. The reader also learns a lot of interesting facts about healthy delicacies. Ingrid Schick, for example, clears up some myths - such as that the green sauce is a genuine Frankfurt invention - and presents the individual herbs used in the sauce.

After this introduction, it's on to the preserves. Green sauce in various forms, sometimes classic, such as by the well-known market woman Gisela Paul or
Also by Maja Wolff, stager of the Green Sauce Festival, sometimes more exotic, such as English Mint Sauce or Peruvian Salsa de Huacatay. Experimental products such as a Green Sauce Praline, Frankfurt Green Sauce Mustard or a Green Sauce Herb Sorbet will also be presented.

At the presentation of the book in Kay Exenberger's Frankfurt snack bar, the press had the opportunity to taste some of the creations presented in the book. The refreshing sorbet by Michael Stöckl as well as the wild herb dip "Ach du grüne Neune" by Dorisa Winkenbach can be recommended here as very personal favourites - simply delicious! Bernd Siefert's Green Sauce Praline also has a certain charm, which is created by the interplay of sweet chocolate and the not too intrusive herbal taste.

However, as is so often the case with the Green Sauce and its variants, the tastes are different. Therefore you can only be advised to buy this beautiful booklet, which also offers valuable kitchen tips and further information about the Green Sauce, and simply try it out for yourself, which is your very personal favourite version of the Green Sauce.