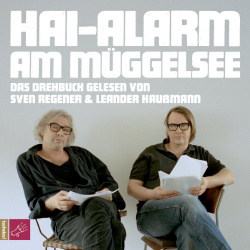 "Hai-Alarm am Müggelsee" is the first production of the Müggelfilm founded by Sven Regener and Leander Haußmann in a beer mood. The two filmmakers have produced a pure fun film in which they not only worked as directors, but also as producers, scriptwriters, composers and actors. With a good-humoured cast that didn't work on the project because of money, but out of pure pleasure and solidarity towards the directors, Regener and Haußmann have staged a series of absurdities, bizarre and unrestrainedly silly gags that aren't oriented to mass tastes and therefore have an extremely refreshing effect. Anyone who likes this very special humor will love "Hai-Alarm am Müggelsee". The others will only shake their heads again and again in amazement or even develop an extreme dislike for this film.

For fans of the comedy, Regener and Haußmann have come up with a very special joke. It is not uncommon for a film to be accompanied by an audio book. And scripts are also published from time to time as accompanying publications. Reading a script as an audio book, on the other hand, is a real novelty and, as the authors themselves call it, somehow audacious. For reading aloud not only the dialogues, but also all the stage directions (Picture X: Müggelsee Outside Day... or Picture Y, writing on black: writing on black "Text Z") is not only unusual for untrained listeners, but also downright disturbing, especially at the beginning. Is that supposed to be funny?

The answer is quite clear: Yes! Even though Regener and Haußmann didn't care about the habits of mass taste in the film itself, they also consistently follow their idiosyncratic style in the audio book publication. For example, they have also dispensed with a clear distribution of roles and instead read out the individual roles in the ping-pong system, i.e. exactly as it happens. It really takes getting used to, but after a while it's really a lot of fun in a very absurd way. It is precisely this absolute negation of every expectation that amuses us so deliciously. This may perhaps only reach a small niche audience that realizes that the two makers of this project have simply put their personal fun in the foreground.

Ob as a film or as a read script, "Hai-Alarm am Müggelsee" is weird, unconventional and filled with absurdities. If you can get involved in this very special humour, you will also be able to enjoy this very special audio book. But if you prefer it more ordinary and expect a conventional audio book, you might want to throw yourself into the Müggelsee after a few minutes of voluntary work.