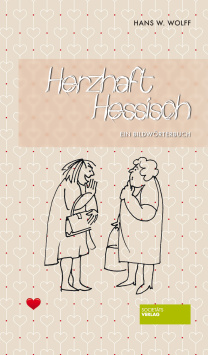 Having already presented a very special language course with "Von Affezäggus bis Zabbelfillibb", Hans W. Wolff now follows up once again with his latest work "Herzhaft Hessisch". Again supported by illustrations of Ludwig Nardelli Wolff explains in his usual amusing, typically Hessian way keywords, dialect terms and phrases, whereby he narrows down the whole in his preface even more regionally. Because there are, so Wolff, in his "Bischelsche" mainly words and sayings with "südhessisch-frankforderischer Zungeschlaach" contained. Who comes from the high north or from "annere hessian peripheries", which can nevertheless also enjoy the picture dictionary. Because one must "des Zeusch from the Bischelsche here yes net nachbabbele".

On the following 130 pages the reader learns why one quickly becomes a "Beleidischt Lewwerworscht" when some "Hutsimbel" insults one as "Aaschgeich", or why it may well be that one as an excessive "Gorschelschwenker" must sometimes "Bröggelscher husde". You learn what can "bambele" with men and women, when you "des Dibbsche to the Iwwerlaafe" or what it is about "Lumbeseggel".

You can tell in every line of this book that Hans W. Wolff loves his dialect and also knows how to deal with it. With a lot of charm, bite and self-irony he makes the reader sometimes smile, sometimes laugh "sisch schibbelisch lache". For this he often needs only a few words and short sentences, in which he plays so skilfully with the Hessian dialect that it is simply a great pleasure. But Wolff is not only able to entertain with his book. Through his use of dialect, he also shows what we Hessians are like: even if we sometimes sound a bit gruff or gruff, we are basically really lovable - "Herzhaft Hessisch". And therefore there is also a deserved: absolutely recommendable