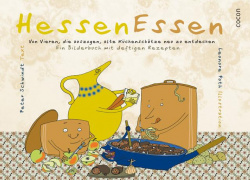 Hessian cuisine has already been immortalized in numerous cookbooks. But rarely has this happened so charmingly and originally as in the culinary picture book "HessenEssen" with texts by Peter Schwindt and illustrations by Leonore Poth. An amusing story presents the highlights of Hessian culinary art.

The focus of the story, told in rhyme form, are the pots Heinz-Dieter and Klaus, the pan Marianne and the pot Doris, who get to know each other on their journey through Hesse and together make some amazing culinary discoveries. These are then presented in more detail in recipe form. Krautkuchen aus dem Gießener Land, Beulches, Versoffene Jungfer, Strohlemsupp, Himmel und Erde, Dulges - here you will not only learn what these strange-sounding dishes are about, but also how they are prepared.

Peter Schwindt, u.a. Author of the popular "Justin Time" series, and the popular Frankfurt draughtswoman and animated filmmaker Leonore Poth have created a charming cookbook that entertains in an endearingly weird way and at the same time invites you to get to know Hessian cuisine a little better. And this enchanting mixture makes the book: absolutely recommendable!