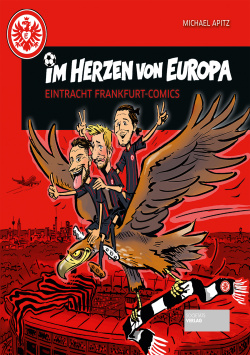 In the Heart of Europe - Eintracht Frankfurt-Comics

Since 2007, the graphic artist, painter and comic artist Michael Apitz has been accompanying the home games of his heart's club, Frankfurter Eintracht, with loving and humorous comic columns that were first published in the stadium magazine of Frankfurter Eintracht. After the series "Im Adler-Olymp" was discontinued in 2012, Apitz got the offer to continue his popular Eintracht-Comics with a new series in the Frankfurter Rundschau. And so the series "In the Heart of Europe" started on 25 August 2012 in the FR supplement HEIMSPIEL, which has meanwhile accompanied four exciting seasons of harmony.

The amusing anecdotes could already be seen in the Rundschau, on Facebook and finally on SGE4EVER, the Eintracht online magazine. Nevertheless, it is a great pleasure for Apitz - and certainly also for all Eintracht fans - that the collected comic amounts of the last four years have now been published in a beautiful volume by Societäts Verlag. A total of 69 episodes of "In the Heart of Europe" are collected in the book and offer the reader the opportunity to experience all the ups and downs of these past seasons in a humorous way. From Armin Veh's desperation to remember all the new names of his recently promoted team to his entry into the Europa League, wading through the relegation swamp or special tactics against the Bavarians to the dramatic relegation fight against the "Glubb" from Nuremberg, the book offers a season review of a very special kind. It's very nice that under the individual comics short explanations about the respective starting situation were put, so that one understands not only as a faithful fan, but also as an ignorant what the individual episodes refer to. However, there are also small details that will only be revealed to true fans of the "Diva vom Main". The best example of this is the heated discussion about the yellow away jerseys, which is commented here by the burning of such a jersey in the background of a picture.

One notices in the comics that Apitz is really involved with this topic with heart and soul, that he can observe very well and that he has a knack for implementing justified criticism charmingly and decidedly. Through his view of the pitch, the cabin or even the heads of the players, he perfectly sums up the feelings of the fans. And that's not that easy, since Eintracht regularly causes extreme fluctuations in the feelings of its followers. If in a moment there's still a lot of rage about wrong decisions and unused possibilities, "European Cup" is cheered again shortly afterwards, as Axel "Beve" Hoffmann (Http://www.beveswelt.de/?cat=9) from Eintracht Museum remarked in his laudation during the press presentation of the book. 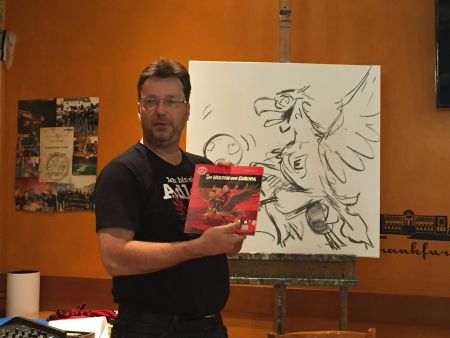 Apitz always keeps the comics up to date. One or two days before the next home game, the ideas are first sketched before a final drawing is drawn in black and white. He then scans them in order to colour them afterwards on the computer. Thus small time documents develop from a fan for the fans, at which one can have also long after the play fun. And that's why this comic book is also clearly recommendable!

More about Michael Apitz can be found below: http://www.eintracht-comic.de