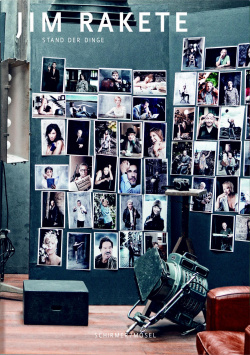 For the first special exhibition "State of Things" at the newly designed German Film Museum in Frankfurt am Main, the great portrait photographer Jim Rakete has gathered everything that is important and famous in German film in front of his lens and has thus created a hundred wonderful portraits that are an extremely worth seeing testimony to the versatile talents of German filmmakers in front of and behind the camera. The wonderful exhibition catalogue, published by Verlag Schirmer/Mosel, is introduced by two readable text contributions by FAZ editor Freddy Langer and director Dominik Graf, who both try to put the photographer's talent and the significance of Rakete and his work into words.

The two texts are followed by the one hundred portraits that can also be seen in the exhibition. The effect in the beautifully designed catalogue is not quite as intense as that of the large-format prints in the Film Museum. But even in the smaller version, the pictures are more than impressive. In contrast to his project "1/8 sec", which was also exhibited at the Deutsches Filmmuseum Frankfurt, Rakete has decided to use "Stand der Dinge" to photograph the personalities in front of the camera in color (and digital). Over a period of two years, greats such as Bernd Eichinger, Nora Tschirner, Michael "Bully" Herbig, Thomas Kretschmann, Sebastian Koch, Roland Emmerich, Til Schweiger, Moritz Bleibtreu, Oscar winner Christoph Waltz and Götz George, who died at the beginning of 2011, stood in front of Rakete's lens. The collaboration between photographer and artist has resulted in some truly fabulous portraits, which have been supplemented by a special detail. Because each of the portrayed persons was photographed with a prop or an object that has a very special meaning for his or her career. 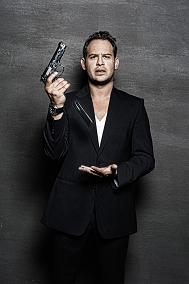 This is how Götz George wears his legendary "Schimanski" Jacket, Christoph Waltz holds his wristwatch from "Inglourious Basterds" into the camera, Nora Tschirner lets herself be caught with a "Keinohrhasen". Caroline Link proudly shows her Oscar for "Nowhere in Africa", Michael "Bully" Herbig sits on the folding chair that the Indians dug up in "The Shoe of Manitu" and Jürgen Vogel poses with the baseball bat from the film "Gravity". For film lovers it is exciting to find out what the meaning of the objects in the pictures are. Why did actress Tina Engel have herself photographed with a potato, director Dani Levy with sugar cubes, or Axel Prahl eating currywurst? It is to be highly credited to the creators of the catalogue that they did not attach the corresponding information directly to the pictures, but only in the appendix. The portraits do not only have a high viewing value, but also a great entertainment value.

It is also remarkable that the portrayed do not come along with excessive make-up and therefore seem rather natural and not glamorous at all. And they obviously didn't work for the rocket, they worked with it. Thus the pictures succeed in telling stories only because of the faces and the small props, which makes viewing a real pleasure. "Stand der Dinge" shows not only the talent of Jim Rakete, but also that of the German film, which at least sometimes is much better than its reputation. Although these portraits are again typical rocket images, they are at the same time something new, exciting and surprising. And even if there are certainly actors or filmmakers among the 100 portrayed people who are not particularly liked personally, the photos as a whole are still absolutely worth seeing. A beautiful book that can not only be recommended to movie lovers.