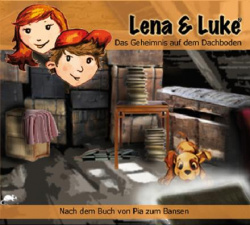 Lena & Luke Episode 1: The Secret in the Attic (radio play)

Siblings Lena and Luke (called Luke in the story) are the stars of a new book and radio play series that aims to teach children about the history of money in an exciting and fun way. Instead of tackling this in the form of a dry non-fiction book, author Pia zum Bansen has opted for a far more entertaining way in which children are taught interesting information without feeling like they are being lectured to. The first story begins with an argument - truly not an unusual situation for siblings. In order to create an atmosphere of reconciliation, Lena and Luke are sent by their grandpa to the attic, where they are allowed to go exploring together with their dog Brownie. When they come across a mysterious box containing many different coins, Brownie suddenly disappears without a trace. As it turns out, the coins allow them to travel back in time and that's where the dog, who was playing with one of the coins, also disappeared. Together with their grandpa, Lena and Luke travel to pre-Christian Lydia, where they discover Brownie at a market. But to get him back, the children must first learn how people traded in that time...

So bartering is at the heart of this first adventure. In the audio version, the story is narrated by the author herself in a very pleasant voice, and her son Henry also has a speaking part as Luke. The whole thing is very entertaining, so that the 40 minutes of playing time fly by for the little listeners. The characters are sympathetically drawn and the story is told in a very child-friendly way. So as an introductory episode that primarily introduces the characters and the initial situation, "The Secret in the Attic" works very well.

For upcoming episodes, a little more suspense wouldn't hurt, of course, because otherwise, despite all the efforts, the impression of an educational piece could arise. But overall, the idea to convey the history of money and trade and thereby perhaps a somewhat more conscious and responsible use of money in this way is a very successful and commendable idea. Therefore, the money for this first audio play series published by the Frankfurt music publisher Blue Sky Music (the accompanying book will follow in September) is well spent! Recommended for children aged 5 and up.

All further information can also be found at: Www.lena-und-luke.de