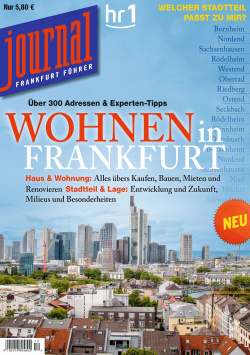 Living in Frankfurt is much sought after. It is almost impossible to find affordable living space, especially in the direct inner city, in Nordend, Bockenheim or Sachsenhausen. But according to which criteria should one actually search for an apartment? And which district actually offers the most attractive offers for singles or is particularly suitable for families? Is it cheaper to buy or rent? Where can I find good interior decorators, plumbers, carpenters or tilers? And what could the Frankfurt of the future look like? The new journal guide "Wohnen in Frankfurt" tries to give answers to these and many other questions.

While some sections are deliberately kept objective and thus also radiate the seriousness necessary for these areas, other texts are much more flowery or even more humorous, such as the view of the "Nordend-Club". The presentation of the individual districts or regions of Frankfurt will also address problems that concern residents here, such as the increasing lack of parking spaces in Nordend or the fear of gentrification in Ostend. Here it becomes clear that "Living in Frankfurt" does not strive to paint as picturesque a picture of the Main metropolis as possible, but rather tries to weigh up all the advantages and disadvantages of the housing situation in the individual districts side by side.

The eight Top 10 lists, which present the districts with the lowest rents, the largest proportion of public parks, the best districts for singles or the most family-friendly districts to the reader, are particularly interesting.

"Living in Frankfurt" is a very informative special issue that can really be helpful when looking for accommodation. But in addition to the numerous expert tips, suggestions and helpful addresses, the richly illustrated articles also offer a high entertainment value and it is fun to roam through the individual districts in the second part of the magazine and perhaps also to make friends with the idea of moving to a part of Frankfurt at some point that has so far been categorically excluded as a place to live.

So if you are looking for a new apartment, are thinking about buying a property in the city or just want to get some ideas for your future life in Frankfurt, this 162-page special issue with 5.80 € can be warmly recommended to you!