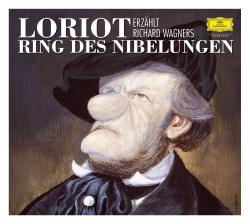 The great Loriot (1923 - 2011) was not only known for his ingenious wordplay and his masterful humorous timing. He also repeatedly expressed his great love of classical music and opera in his very own way. Whether it was his appearance as a very special conductor at the 100th birthday of the Berlin Philharmonic, his narrative version of the "Carnival of the Animals" or his productions of the operas "Martha" and "Der Freischütz", Loriot perfectly understood how to combine humour and aspiration into something very special.

Loriot was always particularly fascinated by Richard Wagner's monumental work "The Ring of the Nibelung". The opera cycle consists of four parts (Das Rheingold, Die Walküre, Siegfried, Götterdämmerung) and in its complete version has a running time of almost 16 hours, which are usually performed over four days. As early as the early 1980s, Loriot came up with the idea of compressing this extensive work and bringing the plot closer to the audience by means of accompanying texts. This is how "Wagner's Ring an einem Abend" (Wagner's Ring on an Evening) was created, which premiered in Mannheim in the 1992/93 season and was later published in a CD edition of Deutsche Grammophon.

This CD recording, which contains excerpts from a recording with the Berliner Philharmoniker conducted by Herbert von Karajan and the accompanying texts written and performed by Loriot, has now been published in a revised new edition.

"Loriot tells the story of Richard Wagner's Ring of the Nibelung" shows in two and a half hours the genius of Loriot and the greatness of Richard Wagner's major work. The accompanying texts are very intelligent and reservedly funny, but they capture the complexity of the work very well. The selected excerpts from the individual parts of the opera, in turn, illustrate the versatility of the cycle that Wagner had composed with interruptions between 1848 and 1874. Even though Loriot's lyrics only make up a small part of the running time, they nevertheless ensure that the entertainment value of this recording is enormously increased and that the opera is also accessible to those listeners who love Loriot but have not yet dared to approach the "Ring of the Nibelung" or who rarely or never deal with operas in general. And that's what this double CD does for all opera lovers and lovers of subtle humour: absolutely recommendable!