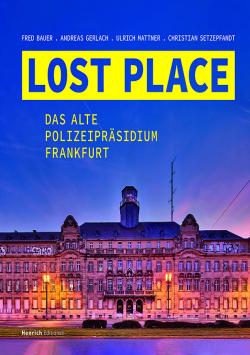 In Frankfurt, numerous city tours are offered day after day, where special places can be visited. Romans, new old town, museums, cemeteries - for almost all areas of interest there is the right city tour, sometimes exciting, sometimes scientific and sometimes humorously presented. But there is hardly a city tour that has gained such popularity in such a short time as the tours through Frankfurt's "Lost Place" - the Old Police Headquarters. Built between 1911 and 1914, the neo-baroque style building has been empty for over ten years now. But it still has plenty of exciting stories to tell.

These are learned not only during the various guided tours, which are offered again and again and attract the "Urban Explorer" from all over the country. Even from Vienna have come to Frankfurt to visit the "New Royal Police Headquarters at the Hohenzollerhof," as the building was once called. But now there is another option, the building now located on Friedrich-Ebert-Anlage, where crimes were solved until 2002, before it served as a club, event space for trade fairs or even a boxing club for the Hells Angels until 2010. The publishing house Henrich Editionen has published a beautiful illustrated book compiled by real connoisseurs of this place: Retired police officer Fred Bauer, who held various positions at the police headquarters, photographer Ulrich Mattner, city and tourist guide Christian Setzepfandt and hr employee Andreas Gerlach present a book full of fascinating pictures and no less fascinating stories.

Until the demolition, which has been decided for some time, but has been postponed again and again, the four offer guided tours of this fascinating and mystical place. Why these are so well received quickly became clear during the guided tour in the context of the book presentation. There is hardly a corner, hardly a room, about which there is not something exciting or amusing to tell. For example, when things that one considers to be particularly authentic (because one doesn't know it any differently from movies and series) turn out to be retrofitted TATORT backdrops. Or when one learns why the prisoner elevator was divided in two or what it has to do with the "police therapeutics", which was located in the basement of the police headquarters.

The book has plenty of other stories and information to offer. For example, Fred Bauer reviews an ordinary morning at work at the Old Police Headquarters (inspired by true events), Andreas Gerlach tells why the demolition of an elevated bunker on the site had to be abruptly halted, and Christian Setzepfandt delves into the investigation of one of the city's most legendary murder cases, the violent death of Rosemarie Nitribitt. Ulrich Mattner provides plenty of fascinating photographs to accompany these and his own text contributions, which capture very well this special fascination that emanates from Frankfurt's "Lost Place". The representative entrance hall may be there of course just as little missing as the detention cells, the radio tower, long, deserted corridors or the numerous walls sprayed with graffiti.

The book combines four different perspectives on this place, which makes it in text and image to an extremely successful tour of the Old Police Headquarters, which will still be possible when this "Lost Place" no longer exists. But as long as that is the case, you should definitely book a tour of this place steeped in history - ideally accompanying the purchase of the book. Such tours through the Old Police Headquarters you can book HERE