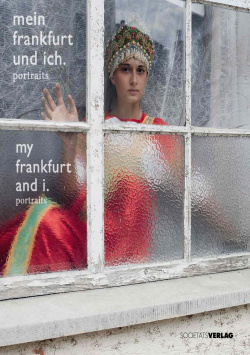 My frankfurt and me. portraits

Frankfurt is known for its multicultural diversity. The Football World Cup in Germany at the latest has shown that its motto "The world as a guest with friends" has hardly fit in as well with any other city as with the Main metropolis. Certainly, the problems of migartion policy, which are currently being discussed more or less objectively by politicians and the media, are not unknown to Frankfurters either. But fortunately it is always noticeable that there is another way, that open-minded cooperation is also possible, that there is real integration here. The best example of this is the "Parade of Cultures", which has long since become a permanent institution and celebrates cultural diversity in a wonderful way.

Although there will be no "Parade of Cultures" in 2011, the basic idea behind this major event can also be celebrated this year in a particularly interesting way. Together with the Frankfurter Jugendring, Societäts Verlag has published the illustrated book "mein frankfurt und ich", in which fifty people of various origins have had their pictures taken at their very own places of choice in their adopted home of Frankfurt. The outward appearance of the portrayed persons represents their original origin, the surroundings their new home. This fusion is the special attraction of this book, whose accompanying texts are presented in both German and English.
>
For example, Constanta Danilovic from Romania poses at the Westhafen in the Gutleutviertel, Agassi Bangura from Sierra Leone is recovering in a very special way in his studio at the Städelschule, Adriana Roselinda Sitepu-Valk had herself photographed in the Zoological Garden and the German-Austrian couple Barbara and Thomas Hentschl bring a touch of Tyrol to the Palm Garden. The photos often captivate with their staged simplicity, through which the mixture of different cultural influences can be expressed very vividly and authentically.

This original parade of cultures is a fine example of successful integration. In a time, in which mostly only their negative sides are talked about, "my frankfurt and I" is more than a welcome change!