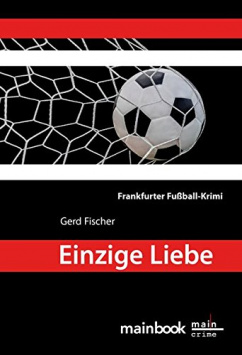 Inspector Andreas Rauscher is back and investigates his eighth case.

In "Einzige Liebe" it hits the investigator from Frankfurt on a personal level, because of all things a fan of his favourite club Eintracht Frankfurt is found during a game near the Commerzbank Arena (excuse me, this must of course be called Waldstadion). The investigation turns out to be extremely difficult, which is why Rauscher's new friend, Commissioner Jana Kern, also offers her help - after all, she herself is a passionate Eintracht fan. But Jana's willingness to help becomes a real problem when her mission is torpedoed by top officials - for very private reasons. And so Rauscher has to investigate again without his Jana, not knowing that she will continue on her own. And that could have very dangerous consequences…  &nbspsp;

"One Love" continues the tradition of Gerd Fischer's Rauscher thrillers. There is a lot of local color, an exciting case, which is connected with true backgrounds of Frankfurt history (in this case Frankfurt sports history). Anyone who knows their way around Frankfurt will recognize a lot here. This applies not only to towns, streets or localities, but also to typical Frankfurt customs. The lovable quirks and the unmistakable preferences of the people of Frankfurt are well observed, for whom Commissioner Rauscher is not just a prime example because of his surname, which is so much appreciated in Alt-Sachsenhausen.

The mystery story of the novel is constructed in an exciting way and can actually entertain well until the end. But for readers who have read the Commissioner's previous cases, it is also nice that his private history continues to evolve and is always creating new entanglements. For example, anyone who believed that the chapter between Elke and their son Max was over is making a huge mistake. It is interesting to see how Rauscher as a human being has developed over the course of his books, and how often his profession, but also his stubbornness, have stood in his way, which has led to his life taking unexpected paths.

"Einzige Liebe" is an exciting, entertaining thriller about Frankfurt and Eintracht, which continues the Rauscher series very successfully and offers an entertaining read for all lovers of the Main metropolis with a lot of local colour and its regionally oriented history. But there is a very clear one: Readable!