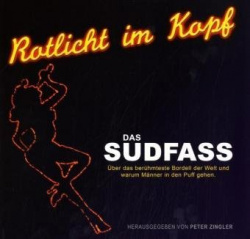 Red light in the head - The brew barrel

The B3 publishing house called for an unusual press date in the Frankfurt brothel "Sudfass", which opened its doors in 1971 and for forty years belonged to the most famous brothels in Germany, Europe and perhaps even the whole world. After all, the company's good reputation has long since spread in Australia, Asia and America. Hardly any celebrity who was a guest in Frankfurt and did not stop at the "Sudfass". Hardly any trade fair guest who has not recovered from the stressful trade fair events in the "Sudfass". The well-known (screenplay) author and director Peter Zingler has now set a monument to this traditional brothel and its founder Dieter Engel.

With the support of some co-authors, such as Monika Büchner, a graduate pedagogue and sexual advisor, Silke Wustmann, a city historian, Doris Lerche, a successful cartoonist, and a text about Frankfurt's nightlife and the "Sudfass", an interesting and amusing book has been written that not only pays tribute to almost 40 years of "Sudfass", but also offers a very special look at the cultural history of customs in the Main metropolis. In addition, the book also deals with the not entirely uninteresting question of why men go to the whorehouse at all.

The richly illustrated book allows the reader a sometimes quite open, honest look behind the scenes of the noble establishment in terms of word and image selection. The story of its origin, Dieter Engels' almost romantic business philosophy, amusing, interesting and sometimes sad anecdotes from the eventful history of the house and its inhabitants are presented here as well as a look at the history of the oldest trade in the world in Frankfurt in general, introduced - how should it be any different in a book about Frankfurt - with the fitting Goethe quote: "Be clean by day and säuisch by night".

Besides the short treatise on prostitution in Frankfurt, the excursus in which the question of the motivation that drives men into brothels is also an extremely exciting reading. Especially since the experts who are most likely to know why millions of men all over the world use the services of prostitutes every day have their say here. What some of the ladies from the "Sudfass" have to say about the motivations of the men reveals, for example, that it is far from just about sex. Monika Büchner then tries to show which different types of men have which different motives for a visit to a brothel and why some of them are actually extremely sad to look at.

It is the mixture of analytical facts, history and the somewhat more relaxed written stories from the house that makes this book so worth reading. For example, the story of the greatest idiot who was ever a guest in the "Sudfass" and with his very special carnal lust almost burned down the whole house, or a short but extremely tragic love story between a prostitute and a bartender, the versatility of the staff and guests of the "Sudfass" is also reflected in the anecdotes described in the book. Especially entertaining is also the guest list of prominent visitors to the brew keg, which has been blackened for legal reasons. Here the reader is challenged to find out, with a little combination gift, which celebrity has already devoted himself to the services of the brew barrel ladies.

Informative, entertaining, open and a little frivolous, that is "red light in the head". A book that makes it possible to immerse oneself in a world that enjoys great popularity among men in particular, but which is nevertheless likely to be rather alien to most people in the openness presented here - and that is precisely what makes reading it so entertaining. Since the house is to be demolished in the next few years, this homage to the "Sudfass" is also a piece of the city's history. Because whether you like it or not, whether you condemn prostitution per se or not, it cannot be denied that houses like the "Sudfass" are an important and integral part of the cityscape and its history.