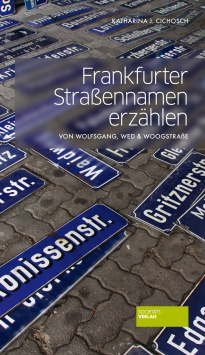 Didn't you often wonder where streets like the "Iron Hand" get their strange name from? Or whether the "Affentorplatz" is a testimony to the fact that there used to be a zoo in Sachsenhausen - or even free-range monkeys? And why is the Freßgass still called Kalbächer Gasse in the city maps? Who were the good folks to whom a whole quarter is dedicated? And who is rattling through the Klappergass? Streets that are named after famous personalities or striking, obvious topographical features can usually be assigned relatively easily and unambiguously. But with names like "Katzenpforte", "Nonnenpfad" or "Am Bier" one quickly gets into a state of brooding when trying to interpret them.

Katharina J. Cichosch tries with her book "Frankfurter Straßennamen erzählen" to uncover at least some of the mysteries surrounding street names in Frankfurt. In a very likeable and sometimes amusing way, the author tries to decipher the stories that the street names tell us. And it also becomes clear that clear historical explanations do not always reveal themselves even after intensive research and word analysis. Too many factors are jointly responsible for the naming of a street, so that one must be content sometimes simply with widespread speculations.

Interesting is also to be experienced who is responsible for it, which street gets which name and why a change as in the case of the Freßgass is not simply to be accomplished in such a way. It's fun to read the many surprising anecdotes hidden behind some names and it's sometimes amazing how much city history is sometimes well hidden in the street names. Numerous photos and a pleasant writing style also ensure that the reading of this book offers an extremely high entertainment value.

"Frankfurter Straßennamen erzählen" is an entertaining walk through Frankfurt and its history. Even though not all the secrets of street names are revealed here, the book reveals enough interesting, amusing and surprising things to deserve an "absolutely recommendable" one.