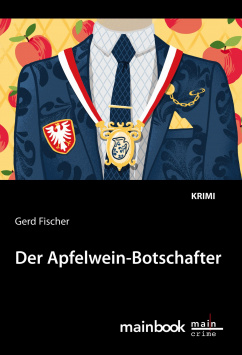 Andreas Rauscher is finally back on the job! But at first, it seems that the still-suspended commissioner has changed careers. That's because the descendant of the legendary Mrs. Rauscher has taken a job as Frankfurt's first cider ambassador in the new, controversial cider department. But don't worry: Rauscher is still working as an investigator, of course - but this time undercover. And soon there is a lot to investigate, because of all people the new cider department head Joachim Adlhof is found murdered in his house on the Riedberg. Rauscher is soon on the trail of several suspects. But that's not all: There is also a lot of excitement in his private life: Rauscher's girlfriend Jana is so not happy with her new job at the water police. She also realizes that Rauscher is hiding something from her that could put their relationship to the test. And then there's Rauscher's ex, who could soon play a bigger role in his life again. Yes, the new cider ambassador certainly won't be bored...

With "Der Apfelwein-Botschafter" Gerd Fischer has published what is now the eleventh Frankfurt crime novel about inspector Andreas Rauscher. After a break of about two years, during which Fischer made a thrilling excursion into the thriller genre with "Rotlicht Frankfurt", the return of Rauscher, Jana and Co. feels almost like a reunion with good friends for loyal readers of the series. The characters have always evolved over the course of the novels, making them extremely familiar. You just want to know how it goes on with them - not only on a professional but also on a private level.

And then there is the actual criminal case, which is again very entertaining and invites you to puzzle along. Fischer cleverly links Rauscher's investigations with glimpses into the perpetrator's past. In the process, the cornerstone of his motive is worked out, but his identity remains skilfully concealed until the very last act. The whole thing is again spiced up with a lot of local colour, but also with little excursions into Frankfurt's city history. And of course a pinch of humour is not to be missed. For example, there is a wonderful scene in which Rauscher tries to make Frankfurt cuisine palatable to a vegan woman who orders non-alcoholic Süßgespritzen (how could she) in his favourite restaurant, the Gemalten Haus in Sachsenhausen. Simply delicious (the scene, of course - but the Frankfurt cuisine, too, of course).

This mixture makes "Der Apfelwein-Botschafter", like its predecessors, an extremely entertaining Frankfurt crime novel that not only continues the Rauscher series perfectly, but at the same time is already laying the groundwork for (hopefully soon) stories to come. A charming and exciting homage to the Stöffche, which can be warmly recommended not only to Rauscher fans!