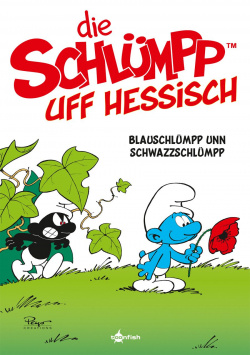 Over sixty years ago, the little blue Smurfs were invented by Belgian cartoonist and author Peyo. Since then, there have been comics, animated series, characters, music albums, motion pictures, and more. You might think that everything is known about the Smurfs, their home Smurfville, or even their nemesis Gargamel. But after six decades, Niedernhausen-based author Sascha Ehlert has managed to reveal a whole new truth about the Smurfs: The little blue creatures babbele "Schlumpp", which sounds an awful lot like our schee Hessisch.

Ehlert, referred to as "de aale Babbsack" in the imprint of "Die Schlümpp uff Hessisch", has after years of waiting finally received the okay from the French license holder to translate the 1963 story "Les Schtroumpfs noirs" from Delia Wüllner-Schulz's German translation into Hessian. This makes "Die Schlümpp uff Hessisch" the first Smurfs comic book ever to be published in dialect. Especially nice: Even the imprint is in Hessian here. Splitter Verlag becomes "Schplidder Verlaach" and Peyo is listed as "Tekschder" and responsible for the "Kritzeleie". The "map" that introduces the comic is also very much in the Hessian style: There is the "path to Frankfurt", the "Höhl to Offebach", the "Weesch to Riederwald" or also "de aale Edersee". No question: Here there is already quite a lot to smile before it actually really starts.

A total of three stories are included in the volume. We start with the "Blauschlümpp unn Schwazzschlümpp" - a real classic in which a nasty "Migg from Offebach" stings a Smurf, who then turns into a "Schwazzschlumpp", who finds everything just "Blääd". Now Babba Schlumpp must quickly find an antidote, because more and more of the Blauschlümpp are infected and hop from now on as Schwazzschlümpp through Schlumpphause. Kall, mei Drobbe...

In addition to this story - for which there was even once a board game - Sascha Ehlert has translated two more stories into Hessian for this volume: "De Schlumpp hinner Giddern" and "De flieschende Schlumpp". In the former, the nasty Gargamel tries to grab a Smurf, as he needs her for a magic formula that will allow him to turn "all magical metal into gold". And "dadafer he zaggisch gets himself en Schlumpp", though that's not quite as easy as first thought, because of course the Smurfs stick together. Or, as Babba Schlumpp says: "Jaachd alle Schlümpp zesamme, mer schlumppe uff de Stell do hie!" And finally, in the last story, a Smurf is determined to learn to fly in order to snatch a "legger Appel" from a tree - which, of course, culminates in all sorts of chaos.

"Die Schlümpp uff Hessisch" is just delightfully Hessian in really every moment. A Smurf is even allowed to sing there: "Erbaame! Zu schlumpp, die Schlümppe komme..." The adaptation is extremely affectionate and funny. It gives the well-known stories a character of their own, without losing the charm of the original. For all Hesseköpp and Smurf fans this volume is a real must! On it I smurf now erstemol a big smurf full Ebbelwoi and end this contribution with the deserved conclusion: Absolutely smurf-worthy!