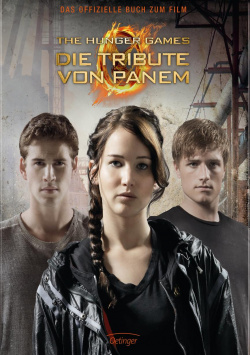 The Tributes of Panem: The Books to the Film

The "Tributes of Panem" Trilogy by Suzanne Collins is one of the most successful youth book series of recent years, along with the "Twilight" books. So it's no surprise that the complex filming of the first volume is hotly awaited by the fans and is naturally accompanied by an extensive product range. In addition to soundtrack CDs, posters and countless merchandising articles, these also include books on film. The "Panem" fans are not only offered a film edition of the first novel with pictures from the film adaptation. There are also two other companion books that fans should not miss out on.

The official book about the film
by Kate Egan

The "official book on film" offers all those interested a glimpse behind the scenes of this spectacular film version. Enriched with numerous photos from the film and from the shooting, the beautifully designed book illuminates the beginnings of the project, from the publication of the novel to the acquisition of the film rights and the adaptation of the script to the casting of the actors and the selection of the right director. The largest and most interesting part of the book, however, is made up of equipment, sets, costumes and make-up. And that's especially nice, because in the movie many details get lost due to the fast cuts and the very restless camera especially in the scenes playing in District 12. But here you can see exactly how much effort the makers put into the creation of District 12 and the Capitol or the creation of the costumes.

Besides the photos, which also show early concept drawings, the accompanying texts explain, among other things, the difficulties faced by the makers in realizing certain details such as the big horn of plenty, how large special effects were prepared, or how the actors prepared for their roles. It becomes clear again and again how much value has been placed on being able to offer the fans of the books an adaptation that is as true to the original as possible. This Making of Book on entertaining, worth seeing and reading Art.

The "official manual of the tributes" is an especially recommended for "Panem" newbies or for those fans who want to refresh their knowledge. Because here all important backgrounds are explained to the hunger plays and to the individual Tributen. From the traditional "harvest" to the train that brings the tributes to the Capitol, to the parade, the training centre and the interviews that take place before the games begin, every step of the annual Hunger Games is illuminated here. In addition, the tributes of the 74th matches from each district will be presented. The reader not only gets to know the background of the story, but also the most important characters - naturally embedded in numerous film images.

The book is a recommendable supplement to the film in this respect, because here, as could already be observed during the Making of Book, several details can be discovered, which are somewhat lost in the film. In addition to the symbols for the individual districts, this also includes the design of the various weapons, the costumes for the parade in the Capitol or the specific tasks of the twelve districts.

What can be credited to both books is that they provide the fan with a lot of interesting information, without ultimately revealing too much. There's hardly much talk about the events in the arena, and even though most readers might already know the story anyway, the film still offers some (visual) surprises, which remain the same even after reading these accompanying books.

If you are already passionately immersed in the literary world of Panem and would like to repeat this in the film version, these two books are highly recommended. For old and new fans of the adventures around Katniss Everdeen and the hunger games absolutely recommendable!