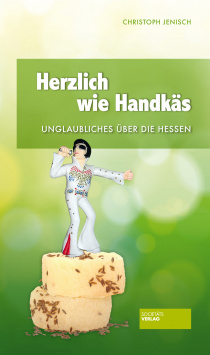 If you are not well acquainted with the manners of the Hessians, their somewhat rough cordiality might seem rude to you. But that is of course a misconception. Because, and Christoph Jenisch proves this quite clearly in his new book, the Hessians are simply "as cordial as cheese": at first sight inedible for non-specialists, but after getting to know them better you simply have to love them. But who are the Hessians actually, where do they come from and what are the very special peculiarities that are always misinterpreted outside the state borders?

In several episodes from their turbulent history Jenisch gets to the bottom of the phenomenon "Hesse". That is sometimes surprising, sometimes a little bizarre, then again extremely illuminating - and always damn amusing. For example, the author explains in his endearingly humorous way why Hessen's conviction that it is not necessary to move away from one's familiar surroundings is practically born in the cradle. He explores the somewhat odd culinary preferences of the region and also reveals the history of Toast Hawaii's origin. He talks about Elvis' experiences with the Hessians and explains why there are so few Hessian adventures in history. The "Hessian Furor", a unique state of mind for this region, is also examined.

Essen, music, Frankenstein, Hessian humour, the Brothers Grimm, all this is mentioned in this collection of incredible stories about the Hessians. Christoph Jenisch finds exactly the right mixture of interesting information and a winking sense of humour. No matter if facts, half-truths or traditional legends, what Jenisch has collected here reads extremely entertaining and delivers some really revealing insights. It's especially nice that Jensich approaches the matter with a lot of humor, but at the same time his love for the region is omnipresent. So there is never the feeling that he makes fun of the sometimes somewhat peculiar peculiarities of Hessen, but that he rather illuminates the phenomenon "Hesse" with a certain self-irony.

So "Herzlich wie Handkäs" has become an entertaining reading that has become a kind of humorous declaration of love to their country and its inhabitants for all Hessians and is a helpful work for all non-Hessians to be able to deal better with the peculiarities of the Hessians and better understand their very special cordiality. Because we are really "Hearty like Handkäs"! Absolutely worth reading!