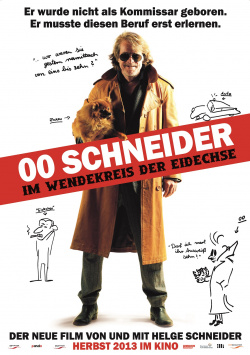 Gangsters beware, crime doesn't pay anymore! Because 00 Schneider, Germany's most ingenious investigator, is back to make sure our streets are safer again. And that's a good thing, because a particularly perfidious villain is currently up to his mischief: Chain smoker Jean-Claude Pillemann (Rocko Schamoni), known as the Lizard, is causing fear and terror by robbing a tobacco shop, stealing a chicken and committing immoral assaults. To put a stop to the cunning criminal once and for all with his caustic spit, Roy Schneider (Helge Schneider) interrupts work on his memoirs, takes ingenious shortcuts while shopping for washing machines with his American aunt (Tyree Glenn, Jr.), and throws on hot drag for undercover investigations. Even a nasty toothache and a runaway gorilla can't stop the genius detective from putting the evil pill man behind bars.

00 Schneider - On the Tropic of the Lizard marks the long overdue big screen return of Inspector Schneider after his successful 1994 hunt for Nihil Baxter, after a hiatus of nearly twenty years. Those who feared that 00 Schneider had lost his very special sleuthing skills or traded in his somewhat unique investigative methods over the years, and those who feared that his spiritual father Helge Schneider had abandoned his penchant for the bizarre in favor of more crowd-pleasing humor, can rest easy. For Schneider's latest work is also an absolutely weird potpourri of absurd ideas, wonderful senselessness and unrestrainedly moronic gags. The plot is only rudimentarily recognizable as such and actually only serves to loosely link individual episodes with each other.

Whoever asks for a deeper meaning here is surely soon close to despair. For instance, when a gorilla (or rather a human in a very bad gorilla costume) walks into a Caf&eacute; and presses an elderly lady's face into a piece of cake, it has as little meaning for the plot as Schneider's visit to a dentist who would rather lay a hand on his assistant than on his patients' teeth. Even when, after buying a new washing machine, the commissioner takes a shortcut with his aunt that leads him over impassable paths to snowy heights, or when a horde of vacuum cleaner salesmen descend on the helpless citizens of the town, one should not expect there to be any explanation or resolution for such events.

Helge Schneider's humour is very special, and this always applies to costumes, sets and masks in his films. This is no different in 00 Schneider - Tropic of the Lizard. It is not enough to know a bit of Helge Schneider and to find Katzeklo quite funny to be able to laugh about the hunt for Jean-Claude Pillemann. You have to really love Helge Schneider, his music, his books and his films - only then will you discover the genius behind a comedy that refuses to follow all the rules of mainstream cinema. For fans, the cinema return of 00 Schneider is therefore absolutely worth seeing. For viewers who have not yet seen a Helge Schneider film and who do not fully understand his very own style, on the other hand, this could be the longest 96 minutes of their lives!