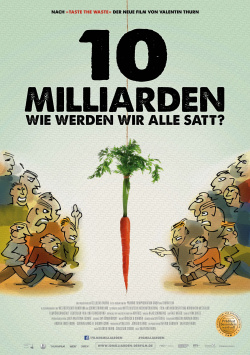 While our planet's natural resources are coming to an end, the world's population continues to grow. By 2050, it will have grown to ten billion people. Ten billion people who need one thing above all else: Food! But where will this come from if far too many people are already starving? Are genetic engineering and industrial breeding systems the solution? Is the consumption of insects as a source of protein a sensible alternative? Or will everyone have to grow their own food in the future? In his latest documentary 10 Billion - How will we all be fed? bestselling author and filmmaker Valentin Thurn (Taste the Waste) gets to the bottom of these questions. He questions the fundamentals of food production, examines the exploitation of scarce resources and at the same time looks for helpful and sensible solutions. The result is shocking, but also shows that it is not too late to change something.

The film also admonishes and does not spare the viewer many very unpleasant images, especially concerning factory farming. And yet Thurn does not pursue a one-sided accusation with a raised forefinger, but tries to illuminate all facets of the topic objectively. And precisely because he holds back on judging what is shown, the images are all the more intense. In this way, the film manages to shake the viewer up and, at least for a short time, to make him think again or even change his mind. Of course, this is not enough, because in order to really change something, the attitude of most people towards food would have to change fundamentally. But - and the film also makes this very clear - every step away from ingrained behaviors, no matter how small, is an important step in the right direction.

Of course, this message is clearly at the forefront of the film. But apart from that it is just extremely interesting to see how agriculture, research, technology and also very simple people face the problem of the impending food shortage. This gains particular appeal, for example, through the juxtaposition of rather original methods of growing vegetables and industrial breeding lines, of factory farming and artificial breeding of meat with the help of stem cells, or even international speculation with food prices and a concept in which smaller communities try to decouple themselves from the big financial economy. For each example there is a counter-proposal, which is not necessarily better, but which shows that the situation is never without alternative.

10 Billion - How will we all be fed? is, in terms of craftsmanship, a very good documentary and, in terms of content, an extremely important film. Valentin Thurn tries this extremely important topic, before which still too many people close the eyes, not too emotionally to work through, but factually to put the facts on the table. It is up to the viewer to draw his or her own conclusions and consequences. But one thing should be clear to everyone at the end of the film: it cannot and must not go on like this, so that in a few decades not only the very privileged, but all people will be fed, without our already very fragile ecosystem finally collapsing. Sure, the film is a bit uncomfortable, but that's exactly why it deserves a: Absolutely worth seeing!