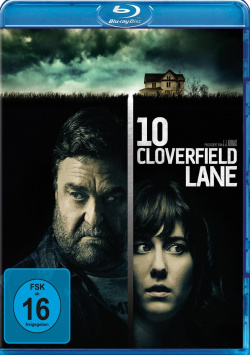 Film: When Michelle (Mary Elizabeth Winstead) regains consciousness after a car accident, she finds herself in a bunker underground. She learns from the mysterious Howard (John Goodman), whom she initially believes to be her tormentor, that he would have rescued her and brought her with him to his bunker. Because by an attack the earth's surface would be contaminated and all humans, whom Michelle knew and loved, would be dead. Only she and young Emmet (John Gallagher Jr.), who had helped Howard build the shelter, were still alive and had to stay underground until the radiation on the surface was no longer lethal. But Michelle doesn't quite want to believe this story. But was there really a destructive attack? And is Howard her savior after all? But if not - what is he planning to do with her and Emmet?

Totally under the media radar, director Dan Trachtenberg and his celebrity producer J.J. Abrams (Star Wars - The Force Awakens) have directed a gripping thriller for a comparatively low budget of $15 million, which was announced with a trailer and poster just weeks before its theatrical release. The title 10 Cloverfield Lane sent many fans crazy, as it seemed that the long-awaited sequel to the found-footage monster movie Cloverfield was finally coming to theaters. Even though word has long since gotten out after the successful theatrical release, here it is once again very clear: 10 Cloverfield Lane is NOT a sequel to Cloverfield. Rather, J.J. Abrams had in mind the idea of a kind of anthology series, set in a similar universe as, say, the American Horror Story series, yet always telling completely separate, independent stories. So while 10 Cloverfield Lane is a blood relative, it's just not a direct descendant of Cloverfield.

So if you're waiting for the monster that haunted New York in Cloverfield to show up or even be mentioned here, you'll be bitterly disappointed. But if you can get rid of exactly this expectation, you'll get a really excellent mystery thriller, which after a somewhat tough beginning is able to intensify its tension steadily. It's almost impossible to deliver a detailed review of the movie without giving away some of the twists and turns that are significantly responsible for the suspense. But this much can be said: The first half of the film already has a gripping atmosphere, but it is primarily dominated by quieter moments and extended dialogue.

But then Trachtenberg increasingly uses very cleverly placed twists and turns, which repeatedly steer the action in a new, often unexpected direction. And the closer the story gets to its finale, the more intense and oppressive the tension becomes in this apocalyptic chamber play. John Goodman delivers an absolutely superb performance, expertly meandering between menacing and endearing and keeping the audience completely in the dark about the true nature of Howard. But Mary Elizabeth Winstead is also perfectly cast as a young woman who refuses to simply surrender to her fate and wants to find out the truth at any cost.

Quickly, all possible connections to Cloverfield are forgotten in the first 80 minutes, and 10 Cloverfield Lane works brilliantly as a standalone. But then comes the furious showdown, where the audience more or less learns what happened beyond the bunker (no, it's not the Cloverfield monster). And on this reveal, and the finale that comes with it, opinions will clearly divide. Because the three-person play suddenly becomes something else entirely, revealing the aforementioned blood relationship to Cloverfield, but somehow not quite wanting to fit in with the rest of the film. But even if for some this resolution won't work, it doesn't change the fact that 10 Cloverfield Lane has become an excellent mystery-thriller for long stretches, which lives on its oppressive setting and the very good actors. And for that, there's a very clear: absolutely worth seeing!

Picture + Sound: The technical realization of the film has turned out very atmospheric. Even if there are some minor weaknesses in the darker scenes to discover in the detail representation, the color scheme and the harmonious contrast mix catch the gloomy-tense mood of the story yet very good. The purposefully used sound effects further underline this impression. They repeatedly provide pleasant dynamics on the surround channels in a sound mix that is rather restrained, at least until the last act. In the last 15 minutes, a lot of powerful surround effects are used, which are much more powerful and effective in the English Dolby Atmos mix than in the equally good German Dolby Digital 5.1 mix. Overall, this gets an absolutely deserved: good!

Extras: The Blu-ray has some very good extras to offer. Starting things off is a very likable and informative audio commentary by director Dan Trachtenberg and producer J.J. Abrams. The two men talk animatedly about the making of the film in a relaxed atmosphere, with Trachtenberg's enthusiasm and passion in particular shining through time and time again. It's a commentary really worth listening to, and commendably also features various subtitle options. In addition, the disc offers seven featurettes with a total running time of 34:42 mins, which can be played individually or in one piece. This results in a Making of worth watching, which goes into detail about the story, the set, the work of the costume designers, the special effects, the post-production and the music. Very good!

Conclusion: 10 Cloverfield Lane works if you generally like mystery thrillers with sci-fi elements and don't expect a direct sequel to Cloverfield. It's a suspenseful film with good actors and a surprising twist that will divide minds, though. The Blu-ray presents the film in good picture and sound quality and also has some good extras on board. For this there is a not really surprising: Absolutely recommended!