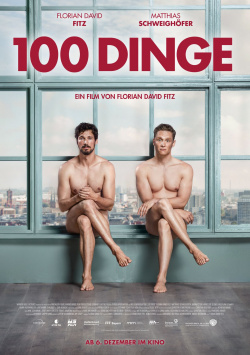 Paul (Florian David Fitz) and Toni (Matthias Schweighöfer) have been best friends since childhood. But as fond as they may be of each other, the two are also in constant competition with each other. This goes so far that shortly before an important deal with their start-up company, they agree to an insane bet: For 100 days, they plan to give up all their beloved things - from their smartphones to their espresso machines to their latest sneakers. Each day, only one item may be reclaimed. Those who lose must share their share of the deal's profits with the company's workforce. It quickly becomes apparent how dependent the two are on their material possessions - and how seemingly fragile their friendship is in the face of such a challenge.

100 Things is the second collaboration between Florian David Fitz and Matthias Schweighöfer after Der geilste Tag. Once again, Fitz was also behind the camera as director and is also responsible for the screenplay. As with the previous comedy, 100 Things is not just about simple laughs, but also about essential themes packed into some moments striving for profundity. The result is an entertaining cinematic tale with some very funny moments, but definitely a few touching ones as well.

However, Fitz overshoots the mark a few times, as he did with Der geilste Tag. So some of the gags turn out to be a bit too flat to be convincing, while they are also served too overdone. But also with the emotional scenes the feeling remains that here and there a shovel too much was packed on. That's a pity, because the staging often works really well. As a viewer you can not only laugh heartily, but also really think about whether you really need so many material things to be happy.

With a little more courage to be subtle and some slightly more consistent script decisions, 100 Things could have been an absolute smash hit. As it is, there's a slightly naive taint to the whole thing. That in itself isn't a bad thing if you think of the film as a light feel-good tale. As such, it also works really well thanks to the good chemistry between the actors. But considering the really good basic idea behind the story, the feeling remains that there could have been much more here. Nevertheless: This charming comedy is definitely worth seeing!