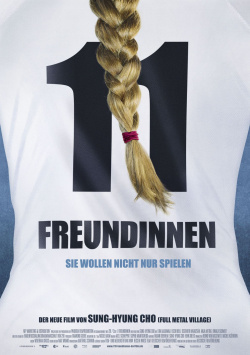 After Sönke Wortmann successfully documented the 2006 World Cup in Germany in Deutschland - Ein Sommermärchen, filmmaker Sung-Hyung Cho also wanted to give fans of the German women's soccer team their very own summer fairy tale. After all, the defending champions went into the 2011 tournament in Germany as favorites. Sung-Hyung Cho, who has shown an excellent knack for entertaining documentaries with the wonderful Full Metal Village, not only wanted to draw the viewer directly into the World Cup action, but also to portray some of the players in more detail. The choice fell on Lira Bajramaj, Bianca Schmidt, Uschi Holl, Anja Mittag and Dszenifer Marozs&aacute;n, who were accompanied by the filmmaker during their preparations for the tournament and in their very private surroundings.

In addition, other players, as well as goalkeeper coach Michael Fuchs or even mental coach Arno Schimpf were interviewed for 11 Girlfriends. And also the reactions of fans were caught on camera. It is in these scenes that the film achieves the strength that made Full Metal Village so successful. Particularly when the men of creation initially make rather disparaging remarks about women's football, only to be swept away by the skill of the players and the enthusiasm of the fans, the viewer is offered some very amusing and rousing moments. Even if when looking at the private lives of the players it becomes clear how big the differences are here, especially in terms of earnings, to their male colleagues, this documentary can fully convince.

On the other hand, some conversations and snapshots seem a bit irrelevant and cause some lengths that rob a little of the power of the successful scenes. To be sure, the conversations, which at times feature a refreshing honesty, aren't completely uninteresting. But especially towards the end, when the tournament takes a rather sad course from a German point of view, there is the feeling that Sung-Hyung Cho spent too much time on trivialities at the beginning and only fully exploits the potential of the material in the second half. It has its appeal when it is shown how Uschi Holl tries to get fit for the world cup after an injury or how players have to combine their passion for soccer with their education or actual jobs, since most of them can't live off soccer alone. But 11 Girlfriends is really worth watching when the special World Cup feeling becomes tangible, when the enthusiasm of the fans and the hustle and bustle behind the scenes are shown.

Compared to her past two films, 11 Girlfriends is Sung-Hyung Cho's weakest film so far. The basic intention is just as good as some of the snapshots, which seem completely unaffected and just charming. Here, the viewer is offered very interesting and revealing insights that are worth watching not only for fans of women's soccer. But unfortunately, especially the first half of the documentary is slowed down by too many lengths, so that the quality of the film can only fully unfold when it is actually already too late to fully carry away the viewers. And that's why the purchase of a cinema ticket can really only be recommended to fans of the German women's national football team. All others can wait for the DVD or the TV broadcast!