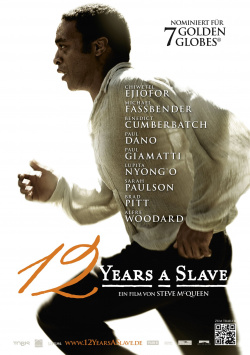 African-American Solomon Northup (Chiwetel Ejiofor) lives a modest but contented life in New York State with his wife and two children. A carpenter and gifted violinist, he has built a reputation during a time when slavery and racism dominate the country, which also brings Solomon to the attention of two strangers from a traveling circus in 1841. The men offer him a brief, very well-paid job as a musician with their show-an offer the gullible Solomon simply cannot refuse. But the decision to unceremoniously follow the two strangers to Washington D.C. without informing his family quickly proves to be the biggest mistake Solomon has ever made. For although at the beginning everything looks like the men will keep their word, after a meal together Solomon suddenly finds himself in the hands of slave traders on their way to Louisiana. Here he no longer has any rights of freedom. Placed in chains, he is sold and must henceforth work for his new masters under the harshest and most humiliating conditions. For Solomon begins an almost hopeless struggle for his freedom, a struggle that will last twelve years and which he pays more than once almost with his life.

With 12 Years a Slave, Shame director Steve McQueen is clearly moving into Oscar territory. The film is truly outstanding just in terms of acting, there's no question about that. But as with Lee Daniels' The Butler, there's always the feeling that 12 Years a Slave was a little too obviously aimed at the big movie awards. Because like Daniels, McQueen has shown himself to be a rather maladjusted filmmaker with a high artistic aesthetic in his previous films. And while 12 Years a Slave's craftsmanship is beyond reproach and its dramaturgical intensity is great and uncomfortable, the film is clearly much more mainstream than Shame or Hunger.

So McQueen then fails to find sides to the story that haven't already been impressively addressed in the great Roots series and similar works. Apart from that, however, 12 Years a Slave is a rousing drama with a few minor lags that lives primarily from its strong actors. Chiwetel Ejiofor finally gets the attention he has long deserved here. As an initially very gullible, then desperate and battered man who tries everything not to let his hope be broken in the face of humiliation and violence, the Brit is simply great. He is supported by an also very impressive acting ensemble, from which especially newcomer Lupita Nyong`o, Michael Fassbender, Sarah Paulson and Benedict Cumberbatch stand out. There is also nothing to criticize about Paul Dano's performance, but after There will be Blood, Prisoners or Looper he runs the risk of being stuck with a very similar type of role. Having seen similar from Dano many times before, his performance here simply doesn't offer any real surprises and as a result doesn't feel nearly as intense as, say, Michael Fassbender's performance.

Based on the memoirs of Solomon Northup, 12 Years a Slave is truly not what one would commonly call feel-good or entertaining cinema. The viewer is forced to watch over two hours of people being humiliated, tortured and exploited. It's a film that is so uncomfortable precisely because it reveals that much of the prejudice and hatred that is witnessed here is still bubbling more or less hidden beneath the surface in parts of society today. And that's precisely why the film's message to never give up hope is somehow liberating in the end. Because at least in this story, the viewer is allowed to believe that good can somehow prevail in the end.

In the fight against slavery and racism, then, 12 Years a Slave may not really tell a new story, but it is moving and stirring all the same. If you are willing to expose yourself to a film that makes you angry and sad, that is painful and uncomfortable, and that also leaves a very depressing aftertaste with the courage to hope, this work can be recommended without the slightest reservation, despite minor criticisms.