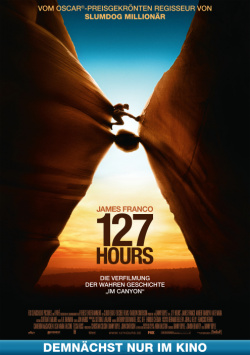 The great art here is that Boyle actually shows quite little, especially at the moment - and this can be revealed, after all, the story made the world press at the time - when Ralston amputates his trapped hand. The perfect interplay of image and sound only creates the images that are so shocking in the viewer's imagination. On the screen itself, however, they are not. The claustrophobic scenery is repeatedly broken up by snatches of memories or hallucinations of Ralston. However, here the real moments and the scraps that take place in his mind, which seems to be getting more and more confused, are so cleverly interwoven that it results in a gripping, fascinating whole that can only be called a masterstroke of direction, editing, camera and sound.

But of course all this would be quite ineffective if the leading actor could not convince all along the line. James Franco is growing more and more into one of the best actors of his generation. The way he carries the film here almost entirely on his own, without being upstaged by the engaging production, has rightly been rewarded with an Oscar nomination. Franco's intense acting blends perfectly with the rush of images, making "127 Hours" a truly unforgettable cinematic experience.

Not truly feel-good cinema, no groundbreaking action, no fancy 3D effects - and yet one of the best films of recent months. A real challenge for the viewer, a masterstroke of all involved in front of and behind the camera and therefore also: absolutely worth seeing!