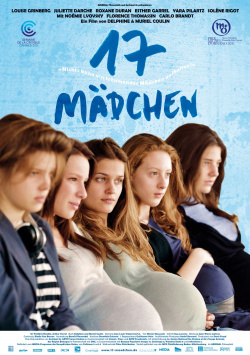 When high school student Camille (Louise Grinberg) becomes pregnant, her life threatens to fall apart at the seams. Lack of understanding and anger from her mother, ostracism at school and little chance of a secure future in an already tough economic time. But there is one thing the girl has not reckoned with: the unyielding solidarity of her friends, who make an unusual pact in the face of Camille's pregnancy: they all want to get pregnant at the same time so that they can then support each other with the offspring. In fact, the girls manage to get themselves impregnated by their boyfriends or fleeting affairs. While the simultaneous pregnancy of 17 girls at the school is an absolute scandal, the friends dream of a communal life, of a future in which they can always rely on each other. But as the due dates approach, the girls' youthful naivety seems to give way to harsh reality...

17 Girls is based on true events that took place in the United States. Sisters Delphie and Muriel Coulin have transplanted the basic framework of the real story to their hometown of Lorient in Brittany and built around it a quiet film about growing up, female empowerment and friendship. From 600 girls, the directors have selected 17 young actresses who can convince with a lot of naturalness and act refreshingly unspent. Louise Grinberg in particular, who previously appeared in a small role in the celebrated drama The Class, makes a very strong impression. The girl's unadulterated beauty in particular reflects both great self-confidence but also a certain youthful arrogance, through which her position as leader within the pregnant clique is believably conveyed. At the same time, however, she exudes enormous naivety and vulnerability, making it clear that on the one hand she is no longer a girl, but on the other she is not yet a woman.

Grown up in a small town where hope for prosperity once reigned, but which is now marked by a lack of prospects and economic decay, the girls know that their future prospects do not look rosy, especially if they have a child before the age of majority. Yet they see this as the solution to escaping their destined fate. The illusion of being able to escape the grey reality as a collective makes them forget all fears for a few months, lets them hope and look into the future with something like joy. This is made very comprehensible by the good acting of the young actresses and the restrained staging of the filmmakers.

As good as the various aspects of the film may be, there are two aspects that might bother some viewers. Firstly, there is the extremely uneventful production, which is trimmed to be extremely realistic in places, where you might have to watch for minutes on end as the girls lie around bored in bed or hang out together and do nothing more than drink and smoke. What for some is a great departure from the mechanisms of the mainstream and a realistic look at the coming of age of young girls, is for others just pure boredom. And that's a pity in so far as the story itself would be interesting enough and the play of the girls strong enough to warrant a somewhat more captivating production.

The second problem is that from this withdrawn and thus also value-free production it results that it doesn't really become clear what the directors actually want to say with their film. They show young girls who on the one hand impress with their self-confidence, but on the other hand behave completely irresponsibly towards the unborn life in their bellies. In a highly pregnant state, they are still drinking and smoking for all they're worth. There is no real condemnation, as this behaviour seems to have no consequences for the future of the children. It is to the sisters Coulin's credit that they don't try to force a certain moral view on the audience. But this completely uncritical view on the irresponsible and plain stupid behavior of the girls takes away a lot of the film's strength and in a way also robs it of its credibility. Sure, that may just be in the eye of the beholder. But given the increasing number of teenage pregnancies, a slightly more sensitive and less naive handling of this very particular aspect of the story would have been desirable.

Besides that, 17 Girls is a strong piece of French arthouse cinema, provided you can get comfortable with the production. Thanks to the great young actresses and some great images, therefore, despite the not inconsiderable weaknesses, in the end for friends of silent program cinema fare is still a decent: worth seeing!