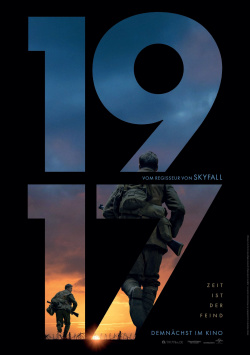 In the midst of the turmoil of World War I, two British soldiers, Schofield (George MacKay) and Blake (Dean-Charles Chapman), are given a mission that is nearly impossible to complete. They have only a few hours to venture unaided through enemy territory to deliver an important message to another unit that would save the lives of hundreds of their chambermates, including Blake's brother. It's a mission that repeatedly tests the two young men's courage and will to survive.

1917, the latest film from Sam Mendes (American Beauty, 007 - Skyfall), is a masterpiece from a craft standpoint alone. In one long take - there is only one clear cut and two or three unseen cuts - the camera follows the mission of the two young soldiers in real time. The viewer squeezes through tight trenches with the two, wades through battlefield mud, or gets buried in a bunker. The outstanding camera work and the great acting of the actors ensure that the mission of the soldiers becomes an extremely intense experience for the audience, as does the great work of the set designers and decorators.

Admittedly, dramaturgically the war drama offers rather conventional fare. But through the way it is staged, Mendes is able to build up a tension that really pushes you into the cinema seat, despite a certain predictability. The events seem extremely authentic and that's why they are so intense and oppressive. However, this also has the consequence that the short appearances of well-known actors like Benedict Cumberbatch or Colin Firth rather tear you out of this intensity. They seem more like a gimmick that the film didn't need at all. No question, Firth in particular delivers his brief performance with bravado, but in this case it might have been more effective to cast roles like these with not-so-familiar faces.

But that is admittedly complaining at a very high level. Because the bottom line is that 1917 is a great film that should definitely be seen on the big screen. The film is a masterstroke by all involved. Because a project like this can only work if every aspect is just right. And that is undoubtedly the case here, despite minimal criticisms. Sam Mendes has created a film that keeps you captivated long after the credits have rolled. No wonder it won the Golden Globe and 10 Oscar nominations. A clear case of: Absolutely worth seeing!