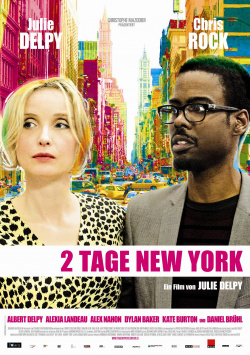 Five years ago, Julie Delpy landed a real surprise hit with her comedy 2 Days in Paris. The story about a pair of French-American lovers who experience all sorts of chaos during a family visit to Paris was able to convince with a lot of charm and a wit that was reminiscent of Woody Allen at times. Now, with 2 Days in New York, the sequel to the comedy is coming to our cinemas. In terms of content, the whole thing hardly breaks new ground. Instead of Jack (Adam Goldberg), Marion (Julie Delpy) is now involved with her former colleague Mingus (Chris Rock). And this time, it's Marion's chaotic clan that invades the couple's New York home. Father Jeannot (Albert Delpy), who likes to scratch up fancy cars, sister Rose (Alexia Landeau), who shows off a very inappropriate permissiveness by American standards, and her boyfriend Manu (Alexandre Nahon), who gets very special weed from Central Park. While Marion tries to keep her neurotic relatives in check, Mingus discovers sides of his girlfriend in all the chaos that seem alien to him...

2 Days of New York is a typical sequel: the same elements from Part 1 are varied anew, in slightly different form and in a new location. Although the family visit to New York is hardly different in structure from the one in Paris, the whole thing just doesn't work the second time around. 2 Days in Paris was already a bit exhausting in parts and the dialogues only conditionally profound, but this could be made up for by a lot of charm and sympathetic wit. But here the permanent bickering, the hackneyed clichés and the sometimes frighteningly irrelevant dialogues just strain the nerves of the audience, whereby the laughing muscles are only very rarely used.

It is certainly a nice idea that comedian Chris Rock, of all people, who is known for his bitterly nasty snout, gives here the reserved, almost stuffy counterpart to Delpy's completely extroverted and over-excited character. But this inherently original casting coup isn't enough to console over the moments of extreme strangeness. The endearing characterization that made the characters, despite all their quirks in the first film, nevertheless absolute sympathizers, can no longer take hold in the second attempt. What seemed quirky in a charming way before now just seems outrageous and completely over the top. The completely unnecessary, only a few seconds lasting guest appearance of Daniel Brühl, who was already seen briefly in the predecessor, puts the crown on the whole thing, he seems to serve only to be able to collect a few German film subsidies.

The extreme culture clash between the conservative Americans and the fun-loving, permissive French has a few pretty decent laughs to offer, but especially compared to the first part, which has charm, joie de vivre and wit sprayed and thus could hide over the weaknesses that occur here far too dominant, 2 Days New York does not stand out particularly well. If you loved 2 Days in Paris and were looking forward to seeing Marion and her family again, you might be inclined to overlook the negative aspects of the film and therefore enjoy yourself quite a bit. However, if you're looking for a charming, original comedy with plenty of French flair and want to spare your nerves, give New York a wide berth these two days.

Cinema trailer for the movie "2 Days in New York (Frankreich/Deutschland 2012)"
Loading the player ...