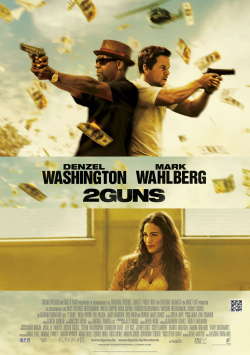 Actually, it should be the perfect coup: in a small bank in the American nowhere some million dollars of a Mexican drug cartel are stored, which Bobby (Denzel Washington) and Michael (Mark Wahlberg) want to snatch under the nail. But they are amazed when the bank's safe deposit boxes contain much more money than they thought. But that's not all. As it turns out, both Bobby and Michael are working undercover without knowing about each other. Bobby has gone undercover for the DEA to work around Mexican drug lord Papi Greco (Edward James Olmos), while Michael is in the service of the U.S. military. When both men realize they've been double-crossed by their superiors and they're suddenly targeted by the drug mafia, corrupt cops and the military, they must continue to stick together - even though every ounce of trust has been lost. But against the powerful enemies out to get them, for better or worse, they can only do it together.

For 2 Guns, Icelandic director Baltasar Kormakur has once again secured the collaboration of his Contraband leading man Mark Wahlberg. Based on the five-part comic novel by Steven Grant and Mateus Santolouco, Kormakur has directed a buddy comedy spiced with plenty of action and, at times, very macabre humour that is extremely good fun. Much of this is due to the two leads, who harmonize perfectly together with an engaging mix of coolness and self-irony. While Denzel Washington's coolness dominates, Mark Wahlberg gets to show off his comedic talent again here. But also in the action sequences, the two stars make a damn good figure, which is supported by the stylish implementation of Kormakur.

Neben the unequal duo, which in its best moments pleasant memories of the Lethal Weapon films awake, shines especially Bill Paxton as an extremely sleazy, ice-cold chief giant, the literally over corpses to get to the money that Bobby and Michael have snatched under the nail. Paxton's performance also manages to blend seriousness and black humor very well, which makes the overall entertainment value of the film soar. Dryly delivered one liners, amusing running gags and some pretty gory interludes are a more than convincing testament to this.

Another reason 2 Guns works so well is that, despite plenty of good laughs, it's also genuinely exciting. True, the story isn't exactly new, and even the surprising twists are unlikely to be seen coming miles in advance by very few viewers. And although originality isn't really offered here, the whole thing seems surprisingly fresh and entertaining. Great intellectual cinema shouldn't be expected here, though. And also viewers who have a problem with the border of political correctness being crossed here and there will have a hard time making friends with the film.

But who loves humorously served action cinema, who can enjoy his popcorn best when the action on the screen is explosive and extremely leaded and who wants to see a thrilling story with two cool heroes, will get their money's worth with 2 Guns. And for this there is then also a more than deserved: Absolutely worth seeing!