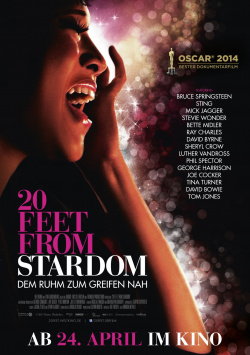 There are numerous classic songs that would never have become what they are today without background vocals. Walk on the Wild Side without background vocals? Hard to imagine. Sweet Home Alabama carried only by the voice of Lynyrd Skynyrd singer Ronnie Van Zant? That would be no match for the powerful version that is still played constantly on the radio today. Or Joe Cocker's With a little help from my friends without the chorus vocals? There are countless such examples where songs have only been given that very special something by the contribution of one or more background voices. But even though they make such an important contribution, first-class background singers like Lisa Fischer, Merry Clayton, Darlene Love, Tata Vega or Judith Hill usually lead a life of total anonymity outside the industry. That's changing now, as Morgan Neville's Academy Award-winning documentary 20 Feet from Stardom finally turns the spotlight on the artists who are otherwise only ever in the shadows of the stars.

The five female artists Neville puts at the center of his film here, representative of the guild of background singers, are all not only very strong voices, but also strong personalities. Among them, Darlene Love occupies a very special position. Not only does she feature as a member of the legendary backing trio The Blossoms on some of the biggest hits of the early 60s. She also managed, over a hard and rocky road, to become a star in her own right. Lisa Fischer was also on the verge of her big break. But after her first Grammy-winning solo album, further successes failed to materialize and Fischer retreated back into the background.

While not all background singers have the ambitions to actually be in the spotlight. For many, it is more important to simply be able to pursue their great passion, singing. But for those who want to make it to the top, working in the background can be an important stepping stone - but, as Judith Hill points out, it can also quickly turn into quicksand. And that's where Neville's film comes in, in a very rousing and also entertaining way. After all, it's not the comparatively rare success stories that are the norm in this business. Rather, the reality is that even great talents like Darlene Love had to work as a cleaning lady despite the highest recognition in the business, or that first-class engagements with stars like Elton John or the Rolling Stones are no guarantee of future commitments. Especially in a time when studios work a lot with samples, loops and other technical gimmicks, it is becoming increasingly difficult for professional background singers to make a living from music.

But first and foremost, 20 Feet from Stardom is a tribute to the great talents who have given countless hits their immortal character and to their often underestimated importance in the history of music over the past decades. Stars such as Bruce Springsteen, Sting, Mick Jagger and Stevie Wonder talk about their experiences with background singers, review very special recording sessions and evaluate the importance of background vocals for their songs. The result is a great musical journey through time, a fascinating behind-the-scenes look at the music industry, and overall an extremely entertaining documentary that music lovers should definitely not miss. Absolutely worth seeing!