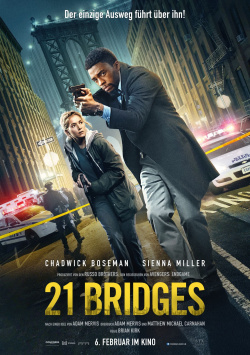 It was supposed to be a simple drug heist, but eight cops end up dead. The two perpetrators are on the run in Manhattan. For disgraced Police Detective Andre Davis (Chadwick Boseman), this case is the perfect opportunity to burnish his image. Without further ado, he has all 21 bridges leading into Manhattan closed. Now he has only a few hours to catch the gangsters. But in his hunt, he quickly realizes that there is much more to the case than first thought. Davis gets on the trail of a vast conspiracy that takes his investigation in a completely different direction - a direction that could prove extremely dangerous to him.

21 Bridges actually has everything a successful action thriller needs: A compelling lead actor (Black Panther star Chadwick Boseman), successful producers who know their stuff (the Russo brothers, who directed the most successful movie of all time), an exciting premise, and a pro in charge of the stunts (Andy Gill, who has coordinated stunts for several Marvel movies and parts of the Fast & Furious franchise). Add to that a promising director (Brian Kirk, Game of Thrones, Luther) and an atmospheric location - though most of the scenes were shot in Philadelphia rather than New York.

Despite this, the thriller ends up being very average. The story starts out promising, but gets more and more bogged down in clichés and a certain predictability. The characters are drawn in such a way that you quickly realize who really has dirt on them. Unfortunately, the big surprises are missing. The main character shows very interesting traits, especially at the beginning, but these are not further developed, especially towards the finale, so that Davis is just a typical Hollywood cop with a few rough edges in the end.

When the action determines the action, then 21 Bridges is really entertaining. And Taylor Kitsch in particular is really convincing as a gangster on the run. Nevertheless: With all the good prerequisites and the potential that the story offers at its core, the film should actually have been a breathless, consistently gripping and gladly surprising cop thriller. Instead, it just turned out to be a decent average movie. Okay, but not really convincing and therefore only worth seeing with cutbacks!