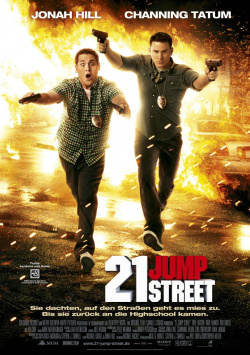 The legendary TV producer Stephen J. Cannell (The A-Team) sent a new cop series into the race in 1987, which quickly became an international hit and also meant the big breakthrough for one of the actors. For 103 episodes, the young cops from 21 Jump Street had to solve various cases at American high schools, where they were infiltrated undercover due to their youthful appearance. One of these policemen was Officer Tom Hanson, portrayed by Johnny Depp, who rose through this role to the very big teen idol - an image from which he could not free himself for a long time, despite many more demanding roles. After Depp left the series after four seasons, 21 Jump Street continued for another season, with Richard Grieco as Booker expected to break the hearts of female viewers. However, with ratings dropping rapidly, the series was cancelled after five seasons and the Booker spin-off was also granted only a short series life. Now, after being dormant for over twenty years, the Jump Street project is being reactivated in theaters.

The basic framework of the film adaptation by Phil Lord and Christopher Miller (Cloudy with a Chance of Meatballs) is very similar to that of the series, only the execution is drastically different from what viewers got to see on TV in the late '80s. The 2012 version of 21 Jump Street is about mismatched friends Schmidt (Jonah Hill) and Jenko (Channing Tatum) who, after successfully graduating from the police academy, talk about a life of adventure and action. But bike patrol in a park proves to be the exact opposite. When the pair blow their first big chance at making an important arrest, they are transferred to the recently revived Jump Street division. There, they are ordered by the resolute Captain Dickson (Ice Cube) to a sting operation at a high school where a new drug is rapidly spreading. Especially Jenko, who was the hero at his school back in the day, this looks like a pretty simple case. But the two undercover cops quickly discover that teenagers today tick very differently than they did a few years ago. Not only do they have to get used to a completely new hierarchy system, they are also confronted with problems and fears from their own school days, which they have long since successfully repressed. And on the side they have to solve a case that seems to be getting more and more dangerous...

While the TV series 21 Jump Street was a serious cop drama with occasional humorous interludes, the movie adaptation is a straight action comedy that scores with crude gags, solid action and some refreshingly original ideas. Fans of the series will be reminded of the good old days with some nice guest appearances and allusions, but otherwise the film really goes completely different ways. This already starts with a wonderfully self-deprecating interlude, in which Schmidt's and Jenko's supervisor talks about the fact that the people in charge ran out of ideas and would therefore dig up dusty concepts again, because nobody would notice that anyway. But even when a highly amusing car chase cleverly plays with the audience's expectations and the big explosion happens exactly when you least expect it, or when the hierarchy structure at high schools has drastically changed in times of series like Glee, it becomes clear that even the world of 21 Jump Street is not what it used to be.

Jonah Hill and Channing Tatum are a really good duo. As different as Schmidt and Jenko may be, you take away their almost brotherly friendship at every moment. The comedic timing between the two actors is spot on, while at the same time they manage to keep their characters from degenerating into flat joke characters. To speak of character depth might be going too far. But Hill and Tatum turn the two schoolyard cops into genuinely sympathetic characters that you'll want to see more of. And after the huge success of 21 Jump Street in the U.S., that's pretty much a given.

Trusty fans of the series may be bothered by the film's occasionally crude humor, since so superficially it might be suspected that the directors are poking fun at the original. Admittedly, some of the very often used clichés, which are not only used in 21 Jump Street, but also in many other TV series, are heavily spoofed here. But a closer look reveals that the film is more taking the mickey out of itself, and it's exactly this mixture of self-irony and exaggerated clichés that makes this movie adaptation a lot of fun for everyone who likes US comedies of the somewhat rougher kind. And for them: absolutely worth seeing!