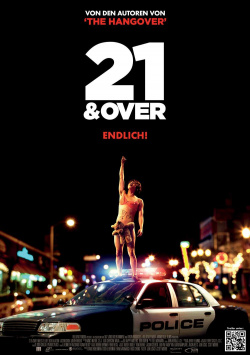 Since the huge success of Hangover, party movies in which excessive alcohol consumption leads to all sorts of tumultuous entanglements have been virtually churned out. While most Hangover clones are released straight to DVD and Blu-Ray, a few of these comedies actually make it to theaters. After the amusing party smash Project X, 21 & Over, the directorial debut of Hangover writers Jon Lucas and Scott Moore is the next binge fest to hit the big screen.

The wild night of partying centers on Jeff Chang's (Justin Chon) 21st birthday, which his buddies Casey (Skylar Astin) and Miller (Miles Teller) want to celebrate as hilariously as possible. Jeff himself doesn't really feel like it, as he has an extremely important job interview at the medical school the next morning. And since he doesn't want to upset his father (Francois Chau), the interview has to go perfectly. But the friends who came especially for the birthday don't give in that easily. At least for one beer, Jeff is supposed to join them at a bar. What sounds like a reasonable compromise is only the beginning of a wild party night in which Jeff loses consciousness after numerous drinks. Now it's up to his friends to get him home and back in shape by 8 o'clock. Too bad they have no idea where Jeff actually lives.

That 21 & Over doesn't really offer anything new should come as little surprise. The borrowings from films like Hangover, American Pie, Old School, and even Ferris Turns Blue at the end are too obvious to allow the comedy to attest to anything resembling originality. Miller, for instance, is clearly just a variation on Pie fan-favorite Stifler. The characters are inherently just walking stereotypes and the gags all seem to come from the recycling bin for party movies. Thus, there is a constant feeling that you have seen this movie somewhere before.

Thus, even if no real enthusiasm wants to arise, the comedy serves its target audience quite neatly. Despite the high recognition value, some of the gags provide really good laughs and boredom does not arise in the fast-paced 90 minutes. Especially the regular run-in with the boyfriend of Casey's crush Nicole (Jonathan Keltz) and the resolution of this plotline is very funny. Although 21 & Over isn't entirely devoid of the genre's usual fecal humor and crude sex jokes, a few gags stand out very positively from this mass of silliness.

Who expects nothing more than a party clone composed of various US comedies of the past years and expects neither profound humor nor multilayered characters, but just wants to have simple knitted fun, 21 & Over can be thoroughly recommended. But if you're hoping for a true genre smash, with a gag density roughly comparable to that of the first Hangover movie, you'll leave the theater with an aching hangover after this diverting bar hopping.