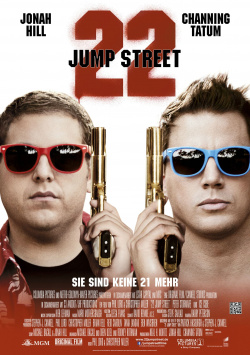 After the police officers Schmidt (Jonah Hill) and Jenko (Channing Tatum) have successfully completed their undercover mission at the high school, they must now go to college. Once again, the chaos duo is expected to track down the masterminds behind the distribution of a dangerous drug. But when Jenko meets a kindred spirit in Zook (Wyatt Russell) during his investigation of the football team and Schmidt meets the sweet Maya (Amber Stevens) in the artist scene on campus, this not only puts the entire operation, but also the friendship of the two in serious trouble. Now the two cops have to prove if they are really man enough to overcome the hurdle of college and finally become serious cops. But it doesn't really look like they will.

With their humorously offbeat revival of the '80s cult series 21 Jump Street, directors Phil Lord and Christopher Miller (Lego Movie) hit the mark in 2012. Their successful mix of slapstick, charming allusions to the series and other 80s crime thrillers as well as explosive action, carried by a perfectly harmonizing actor duo, the film was able to recoup many times its budget. So a sequel was quickly a done deal. 22 Jump Street has adopted the self-deprecating tone of the first part and makes fun of sequels and the associated greed of the studios. And exactly this should have backfired badly, because 22 Jump Street itself follows every common sequel rule.

Because basically the same story as in the first film is told again. Just slightly varied, with more action and even more absurd gags. But Lord and Miller have actually not only managed to make their sequel work really well, despite a certain D&eacute;j&agrave;-vu effect. They even managed to make 22 Jump Street even better and more fun to watch than its predecessor. This is not only the merit of the fast-paced staging, which always hits the right tone and knows how to play with common clichés really well and provide some really funny surprises along the way. Also, the really good chemistry between Channing Tatum and Jonah Hill ensures that the team Jenko and Schmidt in their second job together works even better.

Sure, the film is in many moments unrestrained silly and not even bothered about dramaturgical depth. But that's no tragedy either, because as what the work wants to be, it works almost perfectly. 22 Jump Street is an irony-filled action-comedy that doesn't take itself too seriously and wants to offer the audience what the actors obviously had while shooting. Lots and lots of fun! Although there are numerous gags within the story that will have you laughing really hard, the funniest ideas are clearly in the credits. Even if you are used to jumping up and leaving the cinema as soon as the credits appear, you should definitely force yourself to stay seated here. It's really worth it!

If you liked 21 Jump Street, you'll love 22 Jump Street. And if you look closely, you'll once again be able to spot a few small guest appearances by former series actors. If Tatum and Hill continue to throw the comedic balls to each other so well and the production remains so entertaining, then you really wish at the end of the film that what you see in the credits becomes reality. Not a film for fine minds, but for lovers of brute popcorn entertainment of the particularly funny kind: absolutely worth seeing!