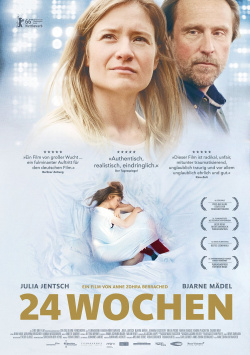 For Astrid (Julia Jentsch) and Markus (Bjarne Mädel) life is going exactly as they wanted it to. Astrid celebrates great success as a cabaret artist, her husband supports her as a manager. Together they have a daughter who is their pride and joy. But then their perfect world is completely shaken up when Astrid becomes pregnant again and the couple learns that the unborn baby is seriously ill. The two of them now have to make a difficult decision. But they are sure that they will make it together. But just when they seem to be sure they have made the right decision, the next Job's news hits them.

24 Weeks asks some very uncomfortable questions. The drama is challenging in every way, not only in content but also in style. Director Anne Zohra Berrached has tried to tell the story as authentically as possible, largely avoiding typical cinematic stylistic devices. This is supposed to create an almost documentary-like character, but it doesn't always work. Apart from the fact that Astrid's brief appearances as a cabaret artist are extremely flat and would hardly have led to a successful career in reality, the improvised-looking dialogues and the acting of the real doctors and specialists in particular seem a little too stilted to actually appear genuine. No question, Julia Jentsch and Bjarne Mädel play well. Still, especially in the first half of the film, the characters seem extremely acted due to the very strained efforts to appear real.

This somewhat unwieldy style then pays off in full in the last third, though. Because what you get to see here is probably the most intense and also unpleasant thing German cinema has had to offer in recent years. The last 15 minutes are very hard to bear, and even if you might have had problems getting into the story at first, you just can't escape this last act. What Julia Jentsch delivers here in terms of acting is simply great and you don't doubt for a second that you are watching a woman who is suffering extremely in the face of her difficult decision.

24 Weeks is not a film after which you leave the cinema relaxed and happy. The drama almost forces discussions, conversations and also a certain processing of what you have seen. And since this is a very sensitive topic, some conversations will probably be very heated. But exactly when that happens, the film has achieved its goal. It wants a taboo to be addressed and for everyone - both those who can understand Astrid and those who will condemn her with every fibre of their bodies - to reconsider their position and seriously ask themselves: what would I do? Even though there is really no answer to this question, unless you are actually in such a difficult situation, it is important to have open discussions about such difficult topics. And that's why 24 Weeks is an important, albeit very, very difficult, work. For those who want to take up this challenge, then clearly: worth seeing!