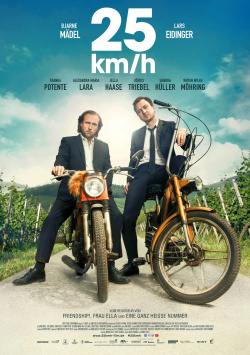 As children, brothers Georg (Bjarne Mädel) and Christian (Lars Eidinger) were inseparable. But then Christian left the small home village, became a successful top manager with a whole new life, while Georg sacrificially cares for his father. When he dies, Christian returns after 30 years - and the brothers realize that they have become complete strangers to each other. And because they have nothing to say to each other except hostility, they turn to alcohol - with unexpected consequences. In their drunken stupor, the brothers decide to start the tour through Germany in the middle of the night on their old mopeds, which they had once meticulously planned when they were 16. But although the hangover the next morning also brings doubts about the sense of such a tour, Georg and Christian continue, secretly hoping that the trip across the country will also bring them closer to themselves again.

Director Markus Goller, who celebrated success with films such as Friendship! or A Very Hot Number, presents a very amusing road movie with 25 km/h, which is above all one thing: a great pleasure. One could criticize that the dramaturgy is quite simple, that the conflicts are very clichéd and that many of the supporting characters remain rather pale, because they are given very little time to develop. But: the movie doesn't claim to be particularly original or profound. And it's clearly about the relationship between the brothers, which is why everything else is rather incidental.

And from that point of view, 25 km/h is really successful. There are some really funny moments and plenty of scenes that put a happy smile on your face. However, it has to be said that not all stations on Georg's and Christian's journey work equally well. For example, the performance of Wotan Wilke Möhring - even if it is served with a lot of playfulness - is far too overdone and also a self-discovery festival ending in drug intoxication shoots a little over the target.

But for every weaker moment there are two successful scenes, which creates a very positive overall picture in the end. Responsible for this are also the two main actors, between whom the chemistry is excellent. Especially Lars Eidinger gives a wonderful performance as a self-absorbed businessman who slowly realizes what is really important in life. It is simply a joy to watch the two actors on their tour through Germany. You can laugh, hope and sympathise with them - and in the end you leave the cinema full of satisfaction at having been entertained for almost two hours in a really good, humorous and charming way. For this there is clearly one: Absolutely worth seeing!