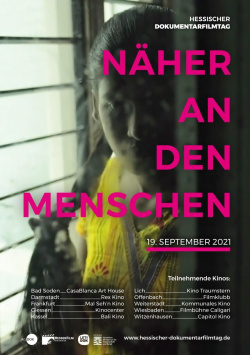 Following the success of the first edition, the second Hessian Documentary Film Day will take place on September 19. Under the motto "Closer to the People", documentaries in which human relationships, community and cohesion play a special role will be shown in selected cinemas throughout Hesse on this day. Programme highlights include the German cinema premiere of the impressive documentary IM EXIL, in which filmmaker Tin Win Naing records his escape from Myanmar, and the poetic documentary essay SANDMÄDCHEN, in which the protagonist describes her impressions of reality as an Asperger's autistic. The multiple award-winning film ABOVE AND BELOW will be screened as part of a hybrid streaming event.

In all of the films, human relationships, community and cohesion play a special role. They are stories that get under the skin. The AG DOK Hessen team, which is organizing this event with the support of HessenFilm und Medien GmbH, wants to show how multifaceted the genre of documentary film deals with reality and with how much heart and soul and commitment filmmakers present a topic or a story in all its complexity. The organizers are convinced: "Documentary film is one of the most important opinion-forming elements in society - especially in cinema". The Hessian Documentary Film Day 2021 is therefore also intended to support the Hessian cinema landscape.

The Hessian Minister for Science and the Arts Angela Dorn will take over the patronage of the HESSIAN DOCUMENTARY FILM DAY. Her greeting will be transmitted via video message to the Wiesbaden Caligari Film Stage. Documentary film is one of the focal points of the Hessian film landscape.

The complete program of the 2nd HESSIAN DOCUMENTARY FILM DAY is available at: https://hessischer-dokumentarfilmtag.de/