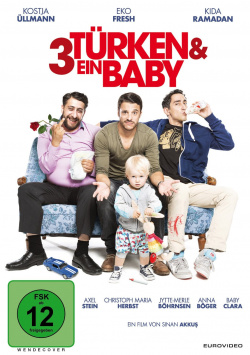 Film: The brothers Celal (Kostja Ullmann), Sami (Kida Khodr Ramadan) and Mesut (Ekrem Bora aka Eko Fresh) have a problem: The bridal fashion business they inherited from their parents is hardly profitable. Meanwhile, they are even threatened with eviction, which could not only make them stand on the street soon, but could also make them lose the memory of their parents. Celal's last chance to pay the landlord the money is in the sand when he gambles away the last part of her inheritance at the casino. The brothers don't have much time left now to save the shop and their home. The fact that Celal has to take care of the baby of his ex Anna (Jytte-Merle Böhrnsen) now of all times, after she was hit by a car, doesn't suit the brothers at all. Especially since they change diapers and have no idea how to feed them. Soon the situation threatens to escalate finally into quarrels and chaos. Now the young men urgently need a saving idea - because otherwise their so far so firm family ties could break finally...

With "3 Turks & a Baby" director Sinan Akkuş ("Evet, I want") presents his second feature film work. The comedy filmed in Frankfurt and surroundings did not look very promising after the first trailer. Rather, the first excerpts promised rather flat gags and a less original story. Although the story is actually very predictable and only a few ideas of its own are woven into the very conventional plot construct, the movie as a whole is much more charming and funny than the trailer would suggest. What is particularly positive is that Akkuş largely avoids the usual clichés that are all too often used in other German-Turkish culture clash comedies. Of course, the cultural roots of the three brothers already play a very important role. And the game with stereotypes and prejudices is not abandoned completely. But all of this is used in a pleasantly balanced dosage, so that the story is not completely superimposed.

That doesn't mean, however, that the comedy offers extremely subtle humor. Many of the gags are rather simple and sometimes it is a bit more brute. But Sinan Akkuş also spices up the deeper moments with enough charm to protect them from any threatening level low. The actors don't deliver any best performances in the chaotic hustle and bustle, but they are sympathetic enough to make this little flaw bearable, too. The scenery of Frankfurt once again offers a few really beautiful motifs (Bahnhofviertel, Sachsenhausen, Alte Oper, MyZeil) in which this amusing city comedy can be perfectly embedded.

Small guest appearances by Christoph Maria Herbst, Robert Treutel (Bodo Bach) or Rainer Ewerrien ("Gods like us"), the high cuteness factor of Baby Clara or the very charming side story about Sami, Laura (Anna Böger) and a very special anti-aggression course raise the entertainment value of the comedy even higher. The whole thing may not be particularly original, profound and sophisticated. But the visit to Frankfurt's most chaotic men's WG is definitely fun. Anyone who likes to put good entertainment above the standard can experience 90 enjoyable minutes here, during which the highs and lows are more or less in balance. And the bottom line for this is very clear: Worth seeing!

Picture + Sound: The picture of the DVD is absolutely clean and also pleases with a high image sharpness, through which even smaller details in most scenes very well come to the fore. The colour scheme is slightly alienated, but captures the atmosphere of the comedy and the beautiful shooting locations in Frankfurt very well with the consistently warm tones and their powerful implementation. As usual in this genre, the sound is mainly dominated by the dialogues and the sometimes a little bit too intrusive soundtrack, but here and there there there are also some well used ambient noises or sound effects, which also demand the surround channels. Good!

Extras: The bonus offer starts with a somewhat chaotic, but also extremely amusing audio commentary by director Sinan Akkuş and his three main actors. It's a pleasure to chomp and kid around here on the side. But you also get to know a lot about the shooting and get an idea of how good the mood must have been there. We continue with a really good Making of (ca. 30:39 MinJ), which presents interviews and film excerpts, impressions from the casting and many shots from the shooting in Frankfurt. In addition there are some funny outtakes (approx. 2:13 min.). Good!

Fazit: "3 Turks & a Baby" is much more funny and charming than the trailer might suggest. Even though the story isn't exactly original and there are some bad jokes coming along, the comedy as a whole is a lot of fun. The sympathetic actors, the good chemistry between the three film brothers, nice guest appearances of actors like Christoph Maria Herbst and a really lovable side story make the whole thing an entertaining, amusing fun, which is presented on the DVD in appealing picture and sound quality. The bonus material, which was both amusing and informative, was also successful. Recommended!