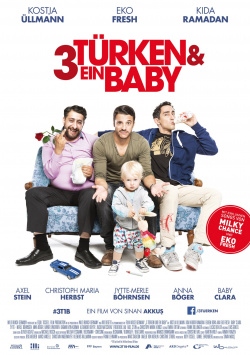 3 Turks and a Baby

Brothers Celal (Kostja Ullmann), Sami (Kida Khodr Ramadan) and Mesut (Ekrem Bora aka Eko Fresh) have a problem: the bridal fashion business they inherited from their parents is barely turning a profit. Meanwhile, they're even facing eviction, which means they could not only soon be out on the street, but also lose their parents' memory. Celal blows his last chance to pay the landlord when he gambles away the last part of their inheritance at the casino. There is not much time left for the brothers to save the shop and their home. The fact that Celal now has to take care of his ex Anna's (Jytte-Merle Böhrnsen) baby after she was hit by a car doesn't suit the brothers at all. Especially since they have no idea how to change diapers and feed the baby. Soon the situation threatens to escalate into quarrels and chaos. Now the young men urgently need an idea to save them - otherwise their family ties, which have been so strong up to now, could finally break.

With 3 Turks and a Baby, director Sinan Akkuş (Evet, I want) presents his second feature film. Shot in Frankfurt and the surrounding area, the comedy didn't necessarily look promising after the first trailer. Rather, first clips promised rather flat gags and an unoriginal story. Although the story is indeed very predictable and weaves only a few ideas of its own into the very conventional plot construct, the film is altogether much more charming and funny than the trailer would have us expect. Particularly positive is the fact that Akkuş largely avoids the usual clichés that are all too readily employed in other German-Turkish culture-clash comedies. Of course, the cultural roots of the three brothers play a very important role. And completely the play with stereotypes and prejudices is not renounced. But all this is used in a pleasantly balanced dosage, so that the story is not completely overshadowed by it.

That does not mean, however, that the comedy offers extremely subtle humor. Many of the gags are rather simple and at times there is a bit of brute force. But Sinan Akkuş spices up even the more lowbrow moments with enough charm to keep them from any looming level lows. The actors don't deliver top performances in the chaotic hustle and bustle, but they are likeable enough to make even this small shortcoming bearable. The backdrop of Frankfurt also once again provides some really nice motifs for this amusing big city comedy to embed itself perfectly in.

Small guest appearances by Christoph Maria Herbst, Robert Treutel (Bodo Bach) or Rainer Ewerrien (Gods like us), the high cuteness factor of baby Clara or also the very charming subplot around Sami, Laura (Anna Böger) and a very special anti-aggression course additionally lift the entertainment value of the comedy upwards. The whole thing may not be particularly original, profound or sophisticated. But the visit to the most chaotic male flat-sharing community in Frankfurt is fun in any case. If you like to put good entertainment before high standards, you can experience 90 pleasurable minutes here, in which highs and lows are more or less in balance. And for it there is then under the line a quite clear: Worth seeing!

Cinema trailer for the movie "3 Turks and a Baby (Deutschland 2014)"
Loading the player ...