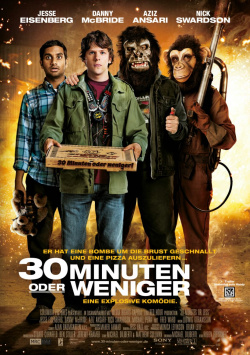 After his acclaimed horror-comedy Zombieland, director Ruben Fleischer has once again teamed up with his leading man Jesse Eisenberg (The Social Network) to once again offer viewers a movie fun of the slightly rougher variety. But unlike Zombieland, 30 Minutes or Less is not about the undead or bloody effects, but rather the raunchy dialogue. And they truly might not be everyone's cup of tea.

In the action-comedy, Eisenberg plays pizza delivery man Nick, who has resigned himself to the rather humdrum daily grind in his small hometown. While his best friend Chet (Aziz Ansari) shows some sense of responsibility as a teacher, Nick has so far steadfastly refused to grow up. But his life is abruptly turned upside down when he is kidnapped and drugged by two would-be criminals, Dwayne and Travis (Danny McBride and Nick Swardson). When Nick reawakens, he has an explosive vest strapped to him that will blow up at the slightest attempt to take it off. Now he has only a few hours to rob a bank for his two kidnappers. Only if he brings them enough money so they can use it to pay a hit man to kill Dwayne's heavily wealthy father will the bomb be defused again. With Chet's help, Nick is determined to take on this difficult and life-threatening task. But in the process, the duo stumble from one mishap to the next.

The idea of 30 minutes or less holds a lot of comedic potential in itself. With a perfectly cast Jesse Eisenberg and some very nice visual touches, the comedy comes very close to the quality of Zombieland in some moments. Especially the bank robbery, but also the appearance of Michael Pena as a particularly humorless hitman provides quite a few really good laughs. Furthermore, the friendship between Nick and Chet is drawn very nicely. Especially at the beginning the two get into an argument, which provides the audience with a veritable volley of laughter.

However, in some moments Fleischer simply overshoots the mark. He seems to rely too much on his characters' raunchy word jokes instead of using more of the situational comedy that is definitely present. Especially Dwayne and Travis seem to be able to talk only in terms of expletives, which is still very amusing at the beginning, but just gets tiring in the long run. After the twentieth penis-sex-masturbation-breasts-joke the air is simply out. Admittedly, these characters also provide for some very funny moments. But too much of their potential is suppressed by the occasionally very shallow jokes, which detracts a bit from the enjoyment of the comedy.

Thus, 30 Minutes or Less doesn't quite come close to the originality and wit of Zombieland. Still, the film is good proof that Ruben Fleischer certainly has a knack for mixing action laced with macabre humor and crude wit into an enjoyable whole, and that Jesse Eisenberg is just a lot of fun to watch, whether he's playing slightly more challenging roles or acting in lighter comedies like this one. If you liked comedies like Pineapple Express or Tropic Thunder, you'll definitely enjoy this one as well. However, those who have a problem with the almost constant use of extreme expletives will truly wish this movie was actually only 30 minutes long or less.