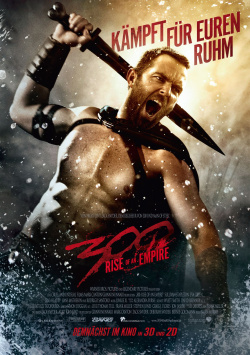 After the dramatic battle at Thermopylae, the war is far from over. While Leonidas and his brave 300 Spartans try to make a stand against the numerically superior army of Xerxes (Rodrigo Santoro), Greek general Themistocles (Sullivan Stapleton) tries to make his dream of a united Greece a reality in battle against the destructive armada of Xerxes` fleet commander Artemisia (Eva Green). But only a small band of fighters joins the erstwhile hero of the Battle of Marathon. Despite a few successful moves, Themistokeles must realize that he is no match for the hate-driven Artemisia and her army. But as news spreads of the heroic deaths of Leonidas and his men, the tide may yet turn.

The opening scene of 300 - Rise of an Empire picks up right where Zack Snyder's 2007 film left off. Still, it's not directly a continuation of the story, as the action takes place not only after, but also before and during the events of 300. Like its predecessor, this second film is once again based on a (yet-to-be-released) original by comic book mastermind Frank Miller, which Zack Snyder turned into screenplay form. Snyder did not take a seat in the director's chair this time around due to his intense work on Man of Steel. That honor was given to Israeli-born Noam Murro, who, after his small indie debut Smart People, ventures here for the first time on a major production with blockbuster potential. The director change is hardly noticeable, though, as 300 - Rise of an Empire is very closely related to the first part, and not just stylistically.

If you want to put it in negative terms, then the term redundant probably sums it up best. Even though the fights have been shifted from land to water and Eva Green and Sullivan Stapleton engage in an erotic duel that is truly exceptional, the bottom line is that viewers aren't really offered much that's new. The action is a bit more intense, there is more CGI blood splattering, but there are no real surprises or something thrillingly different than in the first film. Even the decision to focus the action on Xerxes and Artemisia at first, which is very good in itself, and thus virtually reversing the perspective from the first part, doesn't change that much. After all, the 300 films primarily play out on a visual level, with the plot and even the acting performances being relegated to secondary importance.

That may not sound very appealing right now. But actually, 300 - Rise of an Empire does everything right, offering fans of the first part more of what made that over-stylized battle platter so successful. The battles are more epic, the comic book style more polished, and the brutality more over-the-top. If you enjoyed the Spartans' desperate struggle at Thermopylae, you'll be thoroughly entertained here as well. Sullivan Stapleton, known from the series Strike Back, can't quite hold a candle to his predecessor Gerard Butler. But with Eva Green they found an antagonist who is so wonderfully demon-evil and sexy at the same time that every scene with her is a real pleasure.

Whoever expects historical accuracy, sophisticated dialogues or a multi-layered dramaturgy will of course tear his hair out in despair after a few minutes. 300 - Rise of an Empire bristles with pathos, clichéd dialogues and overblown characters. But as a pure fun movie, Noam Murro has succeeded in making a more than worthy sequel that will drive fine minds into madness that fans of the first film, as well as Frank Miller's original, will have a lot of fun with. Worth seeing