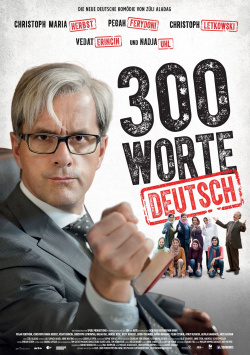 The arch-conservative Dr. Ludwig Sarheimer (Christoph Maria Herbst) of the Cologne Foreigners' Office does not like it at all that masses of uninvited guests from foreign cultures spread out in his city. Especially the Turkish brides that the mosque director Demirkan (Vedat Erincin) brings to Cologne for Turks living in Germany are a thorn in Sarheimer's side. And so he also insists that they actually master the 300 words of German required for entry. When his nephew Marc Rehmann (Christoph Letkowski) is supposed to check this upon the young women's arrival in Cologne, it quickly turns out that the certificates of their German language skills are forged. But the idealistic Marc is persuaded by Demirkan's rebellious daughter Lale (Pegah Ferydoni) to grant the brides-to-be a reprieve so that they can learn the language of their new home. To push this through against his uncle's wishes, he sells it in the media as Sarheimer's idea. But of course he still pulls out all the stops to send the women back to Turkey. When Marc falls in love with Lale, the situation gets really complicated.

German-Turkish comedies come to our cinemas with great regularity, usually produced in cooperation with a TV station. They are films that want to play with clichés in a humorous way, but in the meantime have become clichés themselves. 300 Words German is unfortunately no exception. There is no question that director Züli Aladğs approached the production with the best of intentions. And there's no denying that there are some very amusing and beautiful moments that ultimately save the film from drifting fully into irrelevance. Still, it lacks a certain originality that would have been necessary to make it stand out from the crowd of very similar multicultural comedies.

More to the point, 300 Words German feels like the umpteenth rehash of familiar elements. There is, for instance, the self-confident daughter who leads a very independent life and who dutifully puts on her headscarf whenever she meets her more traditional father and hides from him the fact that she doesn't want to be married off just like that. Just recently, there was a very similar father-daughter constellation in the film adaptation of the bestseller Once Hans with Hot Sauce. But also other set pieces have too high a recognition value to be able to conjure up more than a tired smile in the viewer.

There also the committed play of the actors does not help much. Even an inherently always reliable performer like Christoph Maria Herbst can't do much if he's just cranking out another Stromberg variation with the handbrake on too tight. Especially with his character, it becomes clear that the script, in its effort to hurt no one, has turned out too well-behaved in the end. A little less political correctness and more satirical bite would have added some much-needed fire to the comedy.

That the film is much better off on television than in the cinema becomes particularly apparent in the final minutes. For the ending, presumably in order to meet the TV-appropriate running time, feels extremely rushed and leads the already not particularly original story to its flash finale in an arguably uncharitable manner. It would be wrong to say that 300 Words German is a bad movie. But despite some successful aspects, the bottom line is that the comedy is simply too interchangeable and too inoffensive to justify a visit to the cinema. If you liked movies like Einmal Hans mit scharfer Soße or Almanya, you can at least risk a look at the TV broadcast. Only conditionally worth seeing!