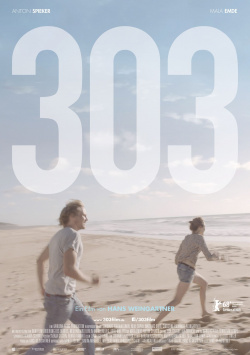 After flunking her biochemistry exam and then learning that she is pregnant by her boyfriend, Jule (Mala Emde) can no longer stay in Berlin. She wants to drive south in her old camper van to deliver the message to the future father of her child in person. At a rest stop, she picks up Jan (Anton Spieker), a politics student who wants to hitchhike to northern Spain to meet his biological father for the first time. The first few minutes of their journey together are marked by mutual sympathy and animated conversation. However, the situation escalates when Jan brings up the wrong subject. And so the trip together is over again very quickly. But as luck would have it, a little later Jan comes to Jule's rescue in a dicey situation and she gives him a second chance. And so a friendship develops on a trip that was originally only supposed to last a few hours, and soon other feelings come into play.

With 303, director Hans Weingartner (Die fetten Jahre sind vorbei) has staged what is, at its core, a truly beautiful road movie full of longing. Mala Emde and Anton Spieker play very authentically and convincingly, especially in the emotional moments. And the landscape shots, accompanied by a pleasantly unobtrusive and atmospheric soundtrack, are really beautiful in parts. Still, the bottom line is that the film is only partially convincing.

This is partly because, at almost two and a half hours, it is simply far too long. There are quite a few moments that could have been trimmed a bit. For such a running time, the story simply gives far too little away. On the other hand, it's also due to the discrepancy between the quiet, tender moments - which, as already mentioned, work very well - and the normal conversations between Jule and Jan. The two talk about evolution, ethics, humanism and other lofty topics in a way as if they had eaten wisdom with spoons in their rather young years. It's clear what the director is getting at with these sometimes heated discussions. But they seem so deliberate, so unnatural, which is in stark contrast to the moments when the actors seem to be able to convey real feelings without any words at all.

This is such a pity, because in itself 303 has the potential to be a great road movie romance without any kitsch, a film about real longings, real fears and real affection, full of truthfulness and beauty. But at some point, the artificial, overly rampant arguments get on your nerves so much that the whole movie suffers from them. And that's why, despite the really strong aspects, the bottom line is that the movie is only worth seeing: Worth seeing with cutbacks!