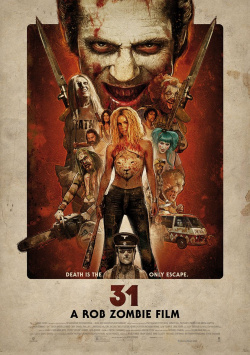 It's just before Halloween in 1976: fairground employee Charly (Sheri Moon Zombie) and her four colleagues are traveling through the deepest backcountry on their way to their next job. In the middle of the night, they are ambushed and kidnapped. Suddenly they find themselves on an abandoned factory site where they become part of a perverted game: In Murder World they have to compete against some insane killers. Only those who survive the next 12 hours will be able to leave the deadly arena again. There are no rules - but no escape either.

With 31, Rob Zombie stays true to his filthy, brutally sadistic style. And this, although he actually wanted to direct no more horror films for a while. But completely freed from the shackles of the studio system and with the help of two crowdfunding campaigns, the musician and filmmaker wanted to return to his roots once again and present a really crude, unadjusted shocker. However, he had to apply the scissors for the release in US cinemas, promising his fans that the uncut zombie cut will be released on DVD at a later date.

If you liked House of 1000 Corpses, you might enjoy 31 as well. The problem with the film, however, is that not only does it not seem particularly well acted, but it also seems remarkably uninspiredly directed. Even though its style has always taken some getting used to and has been aimed more at a small niche audience among horror fans, TDR - The Devil`s Rejects or even the not uncontroversial Halloween films were at least visually convincing. 31, on the other hand, looks dirty, trashy and simply cheap. In addition, there is not a single sympathetic character and you are extremely annoyed by the characters after a few moments - be it, from the victims fighting for their survival, as well as from the partly much too exaggerated acting killers.

It is quite praiseworthy that Rob Zombie broke away from the studio system to not have to compromise and to direct the film the way he wanted to. But that can't hide the fact that Zombie is simply not a good screenwriter, nor that his regular leading lady and wife Sheri Moon Zombie is not a very good actress. Bad dialogue, overacting actors, excessive lengths, and a lack of any suspense to be offset by over-the-top violence make 31 one of Rob Zombie's worst films to date. But loyal fans will still like it and for them the film is made. And therefore there is for the target audience - and only for that - just a: Worth seeing