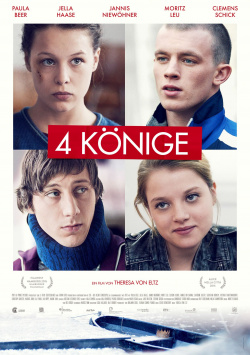 Christmas - this is for many a time of contemplation and harmony. A time that one likes to spend in the circle of his loved ones. This is not the case for Lara (Jella Haase), Alex (Paula Beer), Timo (Jannis Niewöhner) and Fedja (Moritz Leu). The four teenagers spend the Christmas season in a psychiatric ward. Under the supervision of psychiatrist Dr. Wolff (Clemens Schick), they are not only supposed to get their problems under control in individual sessions. Group sessions and other therapeutic measures are also intended to help the young people get their lives back under control. Not so easy with the mental burdens they carry around with them. But maybe there will be a small miracle this Christmas? Or is life just an asshole for some of us after all?

With her feature debut 4 Kings, Theresa von Eltz delivers a pleasant contrast to the usual Christmas comedies. Her drama is a sensitively told story about young people who have lost their footing in life for a variety of reasons. These motives - whether bullying, separation of parents or violence - play a rather subordinate role and are therefore only touched upon. It is never really explained why Lara has a self-destructive streak, why Timo is so aggressive, why Fedja is so scared and why Alex is so closed off. As a viewer you have to accept that in some respects you are simply left in the dark here and not everything is explained.

That's not necessary though. Through the absolutely convincing acting of the young actors in particular, the audience is given a good insight into the darkness that surrounds the psyche of the teenagers. The film derives its tension from the fact that, despite their rather brittle behaviour, the characters quickly grow on you and you hope that Dr. Wolff will succeed with his somewhat unconventional treatment methods and that he will be able to break down the walls they have built up around themselves. At the same time, it's to von Eltz's credit that she doesn't let the whole thing degenerate into a maudlin fairy tale, but always stays grounded in reality despite a certain amount of exaggeration.

Admittedly, 4 Kings is not an easy film. The drama does not provide light entertainment for a relaxing evening at the movies. The heaviness of the subject matter and the very worn narrative style do seem a bit unwieldy at times. Also, some very intense scenes - especially one with Fedja - are hard on the mind. But it's worth it to get involved. Because the staging and the acting of the actors manage to touch and to give the story a certain sustainability, which is missing in many other German films. So if you appreciate haunting German youth dramas and don't expect a feel-good movie, these 4 Kings can be warmly recommended to you. Worth seeing

Cinema trailer for the movie "4 Kings (Deutschland 2015)"
Loading the player ...