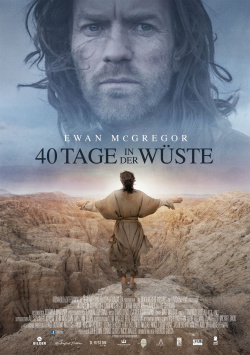 40 days in the desert

Forty days Jesus (Ewan McGregor) goes into the desert to find divine enlightenment fasting in solitude. Always at his side is his diabolical doppelganger, who tries to stir up doubts in Jesus about his destiny and trust in God. On the last part of his challenging journey, Jesus is welcomed into a family that wants to settle in the barren wasteland. While the father (Ciarán Hinds) wants to build a house for his sick wife (Ayelet Zurer) and his son (Tye Sheridan), the boy dreams of leaving the desert and trying his luck in the city. Jesus tries to mediate the tensions between father and son and to help the family build the house. But the devil keeps interfering with his efforts and tries to use this encounter as a test for the Son of God…

With "40 Days in the Desert" director and scriptwriter Rodrigo Garcia wants to tell a glimpse of a rarely told episode from the life of Jesus. The view of his Lent, which he spent in the desert after his baptism in the Jordan, is meant to focus on the people of Yeshua rather than on the Son of God. This happens through the fictional encounter with a family whose conflicts are also transferred to Yeshua. It is an exciting idea that the devil, who took the form of Jesus, should in this doubt awaken the doubt that he can master his task as Saviour if he does not manage to help the family plagued by illness and inner conflicts. But the implementation of the whole is to say the least a real challenge.

No question, the pictures taken in Anza-Borrego Desert State Park not far from San Diego, California, are fascinatingly beautiful. Embedded in a very calm narrative flow, they almost have a meditative effect. In addition there is a very minimalistic musical background. For those who can get involved, a really fascinating story about fathers and sons and about the power of faith unfolds here. But for those who don't succeed in letting themselves be driven by the leisurely narrative flow, the drama turns into a real test of patience. There will certainly be quite a few viewers who will wish for the film as a screen saver, but who will only be able to win little over it as cinema entertainment.

"40 Days in the Desert" is a very interesting film despite its somewhat unwieldy implementation, which manages to show the figure of Jesus from a different side than usual and to approach the subject of faith and religion in a rather subtle way. Even if this is difficult to access, this spiritual journey is highly recommended for lovers of very quiet arthouse cinema. For all others applies: With restrictions still worth seeing!